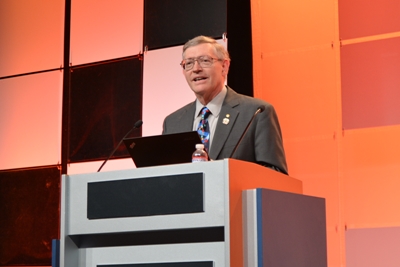 Researchers at Stanford University in California have developed an enhanced version of super-resolution microscopy that uses laser-induced fluorescence to image the structure of individual DNA strands.

The team, which includes the 2014 Nobel chemistry laureate William Moerner, says that the approach could even be used to monitor changes in DNA conformation – the way that the strands fold - in the future, aiding the study of new drugs and the way in which genes are expressed.

Simple adaptation
Writing in the journal Optica, Moerner and colleagues describe a relatively simple adaptation of single-molecule microscopy: the technique for which Moerner and Eric Betzig were awarded their shares of the Nobel prize.

It involves adding an electro-optic modulator (EOM) to a fluorescence microscope, to modulate the polarization of the excitation laser between three distinct, and nearly linear, polarization states.

“Our measurement approach is accomplished using a simple modification of the excitation pathway of a standard fluorescence microscope,” states the team. “No changes to the microscope body itself are required.”

They add: “In the future, this feature will permit our technique to be seamlessly integrated with other imaging modalities, such as 3D super-resolution imaging, which relies upon point-spread function (PSF; the single-molecule images) modulating optics placed in the microscope emission pathway.”

In the latest work, the experimental setup generated super-resolution images and orientation measurements for thousands of fluorescent dye molecules attached to DNA strands.

Rapid capture
Capable of a spatial resolution of just 25 nm and able to determine molecular orientation to within 5 degrees, the technique shows how each individual dye molecule labeling the DNA is aligned, relative to the much longer but extremely narrow structure of a DNA strand.

The paper’s lead author Adam Backer added: “We are also measuring how wobbly each of these molecules is, which can tell us whether this molecule is stuck in one particular alignment or whether it flops around over the course of our measurement sequence.”

Crucially, the approach is extremely fast. In a typical experiment up to 300,000 single-molecule locations and 30,000 orientations can be captured in just 13 minutes. That is a huge step up from confocal techniques, which are only able to analyze one molecule at a time.

Backer also suggested that the technique could be widely adopted, saying: “If someone has a single-molecule microscope, they can perform our technique pretty easily by adding the electro-optic modulator. We’ve used fairly standard tools in a slightly different way and analyzed the data in a new way to gain additional biological and physical insight.”

Whether the technique will be suitable for "live" imaging of DNA in cells appears debatable. As Betzig has pointed out before, most approaches to super-resolution microscopy rely on a high photon fluence that would be damaging to cells. The peak laser intensity used by the Stanford team for imaging DNA samples was 10 kW/cm2, and Betzig told optics.org previously:

"As I see it, the fundamental reasons for doing fluorescence microscopy in the first place are to achieve protein-specific contrast and structural imaging, and do so in live cells. Of all the super-resolution methods, the only one with a real prayer of finding a significant application space in live-cell imaging is structured illumination microscopy. Any kind of confocal or point-scanning super-resolution operation is just not compatible."

In their experiments, the Stanford team used an EOM from US-based modulation specialists Conoptics, alongside Coherent lasers operating at 561 nm and 641 nm, one of Andor’s iXon electron-multiplying CCD sensors, and optical components from Thorlabs, Olympus and others.