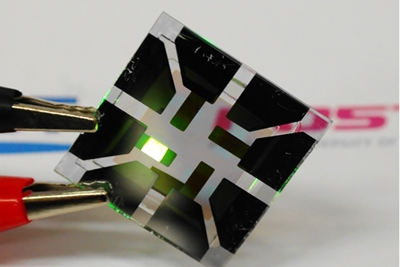 Researchers at the Korea Advanced Institute of Science and Technology (KAIST) have reported improvements to transparent graphene electrodes that may see the technology replace conventional but brittle indium tin oxide (ITO) in future organic LED displays.

The transparent electrode application has long been regarded as a likely entry point for graphene in the commercial world, but the efficiency of OLEDs based on the two-dimensional form of carbon has, thus far, been no better than those fabricated on ITO.

Graphene sandwich
In an open-access Nature Communications paper published earlier this month the KAIST engineers proposed a new approach: fabricating a transparent anode in a composite structure in which a titanium dioxide layer with a high refractive index and a hole-injection layer of conducting polymers with a low refractive index form a “sandwich” around the graphene layer.

They explain that this increases the reflectivity of the optical cavity’s Fabry-Perot resonance in the electrode structure, leading to higher efficiency and a wider color gamut.

According to KAIST’s tests, these new graphene-based OLEDs showed a maximum external quantum efficiency of nearly 41 per cent, and a luminous efficacy of 160 lumens per watt – unprecedented in a device featuring the two-dimensional form of carbon.

Seunghyup Yoo and colleagues also tested the robustness of the design by bending the devices more than 1000 times – after which they were said to be perfectly intact.

Yoo explained: “What’s unique and advanced about this technology, compared with previous graphene-based OLEDs, is the synergistic collaboration of high- and low-index layers that enables optical management of both resonance effect and SPP [surface plasmon polariton] loss, leading to significant enhancement in efficiency, all with little compromise in flexibility.”

Colleague Tae-Woo Lee added: “We expect that our technology will pave the way to develop an OLED light source for highly flexible and wearable displays, or flexible sensors that can be attached to the human body for health monitoring.”

Bendability
OLEDs have become more widely deployed in recent years as the technology largely pioneered by Korea’s Samsung and LG Display has matured, although the price of larger-scale screens remains much higher than similar LCDs because genuine volume manufacturing scale is yet to be reached.

Part of the reason for that, and the lack of any hoped-for flexible displays based on the technology, is the nature of the ITO electrodes currently used. Although ITO offers high transparency, low sheet resistance, and a well-established manufacturing process, the material is stiff and susceptible to bending-induced formation of cracks. Flutuations in the price of indium can also drive up production costs considerably.

In their Nature Communications paper, the KAIST team wrote: “Given the level of efficiency and bendability realized in this work, we believe the proposed method can pave the way for graphene-based OLEDs to become a next-generation light source balanced with both efficiency and form-factor advantages.”