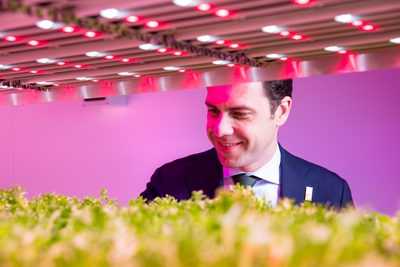 Growing in value: LEDs for horticulure

Shares in Philips Lighting, the division just spun off into a separate entity by the Dutch electronics giant, have retained initial gains after the start of unconditional trading in the stock on May 31.

Philips sold around a quarter of the company in the initial public offering (IPO). Listed on the Euronext Amsterdam exchange with the ticker symbol “LIGHT” and a launch price of €20 on May 27, the stock has since risen in value to €22.

The IPO followed unsuccessful attempts to sell the division to private equity buyers, and – according to some commentators – the apparently successful flotation suggests that Philips has been able to call the bluff of those buyers, who did not meet the firm’s price expectations.

Writing for Bloomberg News, columnist Chris Hughes noted: “Companies trying to sell off assets can now credibly say they will turn to the IPO market if they aren't offered a high enough price by private equity bidders.

“Until recently, that had seemed like a hollow threat given the poor performance of European IPOs this year. But the success of Philips Lighting shows that issuing shares to stock-market investors is a viable alternative.”

The €20 launch price implied a market capitalization of €3 billion for Philips Lighting, which made a €331 million pre-tax profit on sales of nearly €7.5 billion in 2015.

Offering “oversubscribed multiple times”
Just prior to launch, Philips Lighting CEO Eric Rondolat said: “I am excited about the level of interest from both institutional and retail investors, which underpins our belief that our investment case is solid, supported by strong cash flow generation.

“With [our new shareholder support], we look forward to further expanding our global market-leading position by driving the transition to LED and connected lighting systems and services.” Philips also said that the offering was oversubscribed “multiple times”.

Even after over-allotment options are exercised, the initial sell-off still leaves Philips owning more than 70 per cent of Philips Lighting - but Hughes believes that the parent company has “been able to leave buyers wanting more”.

He suggests that the kind of deal just completed typically means finding demand for around four times the amount of stock actually being sold – and that those buyers are mostly long-term investors and not hedge funds looking for a quick gain.

“In this case, Philips Lighting may have been able to attract more long-term investors because it is a known quantity and the sheer size of the offering minimized the risks of extreme price swings that might normally have deterred buyers,” he wrote, adding that there were positive implications for other potentially large IPOs, for example if Spanish telecoms giant Telefonica looks to spin out its UK mobile unit O2 following a European regulatory ruling blocking a sale to CK Hutchinson.

• In early trading on May 31, after the start of unconditional trading in the new stock, Philips Lighting dropped very slightly in value but at just over €22 was still up 10 per cent on the launch price.