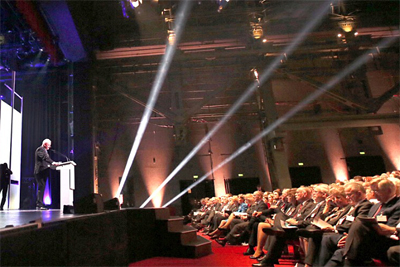 During last week’s annual conference of Germany’s Fraunhofer industrial research and development organization, several prizes were presented at the city of Essen event to some of the more notable developments from the past year.

Two of the three €50,000 “Joseph von Fraunhofer” awards went to photonics-related technologies: the first for improving the development of Passivated Emitter and Rear Cell (“PERC”) solar cells; and the second for novel mini projectors with smart optics that correct for irregular projection surfaces.

”Today, the total amount of electric energy derived from photovoltaic sources is more than 250 terawatt hours, equivalent to the output of 30 nuclear power plants. In order to help meet international climate objectives, the amount of photovoltaic power newly installed each year will have to increase by factor of ten over the next 15 years. On the whole, solar technology will have to become more efficient and cost-effective in order to meet the demands of this market.”

So said Dr.-Ing. Ralf Preu, Director of the Division‚ PV Production Technology and Quality Assurance, at the Fraunhofer Institute for Solar Energy Systems ISE in Freiburg (“ISE”). Preu is part of a team at ISE that has developed a new laser-based manufacturing process developed, which he says, is “revolutionizing the photovoltaics market”.

The researcher and his colleague Dr. Jan Nekarda have made an important contribution to climate protection with the development of Laser-Fired Contact (LFC) technology, enabling the manufacture of more efficient solar cells at lower cost. Most solar cells are equipped with a wide-surface metallic contact, covering the entire backside of the silicon wafer and allowing electricity to flow from the cell to the electrode. This configuration however limits efficiency.

A more high-performance alternative, discovered in 1989, is the Passivated Emitter and Rear Cell technology (PERC). In contrast to conventional cells, this technology includes an additional reflective layer on the backside of the cell and thousands of electric contact points. The LFC process developed by the Fraunhofer researchers has enabled the first industrial mass production of PERC solar cells. 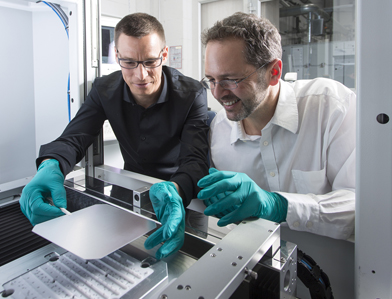 A thin non-conductive layer is deposited on the underside of a PERC solar cell between the contact layer and the wafer. Acting as a mirror, this layer reflects the share of sunlight not absorbed when penetrating the wafer back into the silicon wafer. Since the front side also reflects this light back into the wafer, it is also captured in the silicon wafer and the efficiency level of the solar cell increases. Drawing the electricity from the wafer requires many small apertures in the non-conductive layer in order to establish contact between the electrode metal and the silicon wafer.

The LFC procedure creates each of these approximately 100,000 contacts per wafer with a single laser pulse. “The challenge was to coordinate the pulses in such a way that contact is completely established, while damage to the silicon is kept to minimal levels. Here it‘s crucial that the laser light effect is limited to between 50 and 2,000 nanoseconds,” said Jan Nekarda, group manager at the Fraunhofer ISE. An innovative system for guiding the laser beams makes it possible to create all the contacts in approximately one second.

“PERC solar cells made this way have an improved efficiency level of one percent absolute. With today‘s solar cell efficiency of approximately 20 percent, that‘s about five percent relatively. We gain an additional two percent in the system, which means we increase the overall energy yield by seven percent,” said Ralf Preu.

Solar cell manufacturers can easily and inexpensively integrate the laser procedure in existing production processes. According to company figures, Hanwha Q Cells has already made 20 million cells – using LFC technology since starting production. Companies around the world have in the meantime put PERC technology into mass production. In the current year alone manufacturers have invested more than €200 million in the implementation. 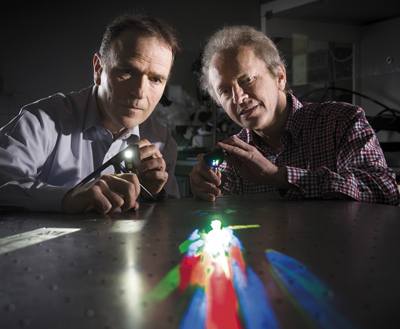 An image projected on a slanted or curved surface appears distorted and can appear out of focus in some areas. But now, a high-intensity mini-projector about the size of a euro cent coin (16mm diameter) from the Fraunhofer IOF, in Jena, corrects for this effect. The projector‘s secret: hundreds on tiny lenses inspired by the model of an insect‘s compound eye.

It took only a few years for Fraunhofer researchers to develop a miniature projector, from this concept into series production. Compared to conventional models with one channel projecting a single image, this LED array projector creates a bright and crisp images by overlaying hundreds of channels on one another, precisely down to the pixel.

“The technical advantages, particularly in automotive applications, include for example the small dimensions and ruggedness of the micro optics,” said Marcel Sieler, former project manager at the IOF. Sieler was among those responsible for realizing the projector on an industrial basis, which has already been featured in 7 series BMWs since mid-2015, creating a light carpet about four meters in length along the side of the car, illuminating obstacles and irregularities on the ground.