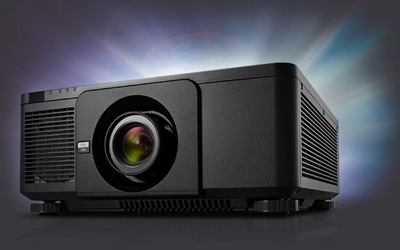 The Japanese firm’s US subsidiary demonstrated the prototype at last week’s CinemaCon 2016 convention in Las Vegas, the annual meeting of the US National Association of Theatre Owners and also the world’s largest cinema conference.

NEC Display Solutions of America said that, thanks to the IPG laser engine, the NC3540LS prototype is capable of producing a brightness of 35,000 lumens – or twice that if the system is arranged in a double-projector stack for ultra-large screens.

Broad laser linewidth
IPG exhibited at the CinemaCon event, showing off its new laser luminaire system. It can be configured with either three or six lasers, for 2D and 3D digital cinema projection respectively.

One of the key aspects of the system’s design is that the laser linewidths are unusually broad – a feature that helps to reduce speckle, something that has historically blighted the uptake of laser projector systems that have been developed to address the relatively low brightness of 3D digital cinema.

At the Photonics West conference held in San Francisco in February, IPG Photonics’ Alexey Avdokhin gave a keynote talk on the company’s development of a new range of ultraviolet and visible-range fiber lasers for various applications – of which digital cinema is one.

Critical to producing the various colors is harmonic generation, which in the case of the red laser wavelengths is combined with Raman conversion. IPG has strong in-house expertise making the nonlinear optical crystals that are needed for frequency-doubling or tripling, and Avdokhin highlighted recent advances in harmonic generation efficiencies, thanks largely to the high quality of the lithium borate (LBO) crystals used.

Beck said that laser phosphor (LP) technology was now having a “dramatic impact”. Similar in principle to the way that blue LEDs are used with phosphors to produce white light, LP involves using a blue laser to produce the green and red bands, rather than using dedicated lasers for the longer wavelengths.

"The LP process is less efficient overall, since you are not directly generating the wavelengths that you really want; but it starts with a very low-cost blue source and essentially puts it through a lumen multiplier," commented Beck. "Laser-pumped phosphor has emerged as a compromise between lower maximum brightness and source lifetime, in exchange for lower initial cost.”

In its announcement of the IPG-powered ultra-high-brightness prototype projector, NEC also confirmed that it was working on LP technology, saying: “NEC also plans to enhance its line-up of affordable laser phosphor projectors for medium screens requiring up to 15 m screen-width later this year.”

“The cinema industry needs urgently to improve the 3D movie-goer’s experience by replacing xenon bulb light sources with very high lumen laser lights,” he said at the time. “We believe that IPG's laser luminaire will deliver the brightness and dynamic range the industry is demanding for a new generation of premium large-format 3D cinemas.”