Median salary for women in photonics is nearly 30% lower than for men, finds latest global survey by SPIE. Is the photonics industry sexist? 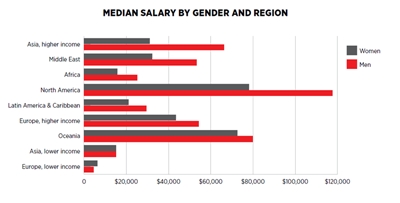 Median salary by gender and region (click to enlarge)

Women working in photonics are typically earning around 30 per cent less than their male counterparts.

That’s one of the findings in the latest global salary survey covering the industry, which was conducted by optics.org publisher SPIE.

The SPIE survey generated close to 7000 responses from more than 100 countries. 17 per cent of those respondents were female, a proportion that roughly mirrors the representation of women at SPIE events like Photonics West and within the SPIE membership, states the international society.

Median salaries for male employees are higher than those for women at every stage of career progression but while the gap is very small for those employed for five years or less, after five years the gap grows dramatically.

Men with 5-10 years’ experience typically earn around $55,000, but women employed for the same number of years earn a median salary of only $43,000. After more than 30 years’ in employment women earn a median of $68,000 – slightly above the overall median figure for the entire industry – while men’s salaries have ballooned to a median of more than $105,000.

Curiously, the only employment sector where female respondents were found to have a higher salary than their male counterparts was in “civilian government”. Here, the male median figure of just over $90,000 was eclipsed by the female median of around $135,000 – in what appears to be anomalous data.

In every other employment sector, the normal gender pay gap remained, and was seen at its strongest in not-for-profit organizations and private-sector companies and corporations.

Despite the widespread gender pay gap the latest salary survey results, which are available in full via the SPIE Career Center web site, show that nearly two-thirds of women respondents felt that they were paid fairly, compared with three-quarters of male respondents. 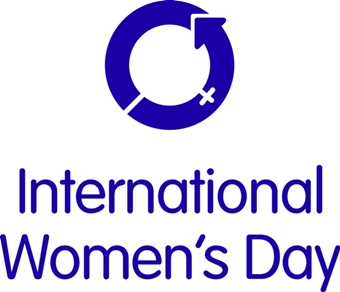 The OSA, whose CEO Liz Rogan is one example of female leadership in photonics, has just announced the latest recipients of its 19 annual awards and medals – with only one woman, Stanford metamaterials expert Jennifer Dionne, among the winners.

Dionne claimed the Adolph Lomb Medal for researchers making noteworthy contributions to optics under the age of 35.

In a blog post for the International Year of Light (IYL) published last year, Spanish astrophysicist Sandra Benitez Herrera argued that the future of science was in the hands of young girls and women – suggesting that the gender gap ought to narrow with time.

She wrote that there was a need to celebrate the women who have made historic contributions to science: partly because many will not have received the credit for their work in the first place, but more importantly to create role models that girls can identify with, and to overcome the pervasive sense that science is an overwhelmingly male-dominated sector.

“Hostile work environments”
Any visitor to a major photonics event would pick up on that male domination, although it is far less marked in sub-sectors involving biology and medicine and symposia such as the biophotonics-focused BiOS Symposium within Photonics West.

“Our societies need to leave the old preconceptions behind and start thinking about strategies to motivate girls into liking science and support young female scientists who encounter many obstacles, and sometimes really hostile work environments, in their paths towards high-level scientific positions,” wrote Benitez Herrera in her blog post, citing initiatives such as L’Oreal’s Change the Numbers campaign to encourage more girls to pursue science and technology degrees as a positive development.

She continued: “To win the battle of equality in science, it is mandatory to empower more women into high academic positions, so our societies [see] meaningful contributions to science and, more importantly, hear them speaking about it.

“It is time for women to begin telling about science and explaining it to the community. It is time for girls to feel that science is a new world they can explore and be excellent at, that science can be a very important and rewarding part of their identities.”

Women in Optics
Meanwhile, initiatives such as SPIE’s Women in Optics – launched in 1998 – continue to work towards achieving greater equality by encouraging more young women to choose optics as a career.

At the SPIE Photonics Europe event in Brussels, Belgium, next month, the organization will showcase the work of Sarah Bohndiek from the University of Cambridge and the Cancer Research UK Cambridge Institute.

Bohndiek will present some of the work carried out at the VISION Laboratory that she leads, a collaboration between Cambridge’s department of physics and the charity Cancer Research UK.

Cutting-edge techniques under investigation at the VISION lab include photoacoustic tomography and hyperspectral imaging, aimed at better understanding of cancer therapy response, drug resistance and the specific role of oxygen in tumor cells and the surrounding blood vessels.