Iodine vapor is destabilising certain high-efficiency perovskite solar cells; but can the problem be solved? 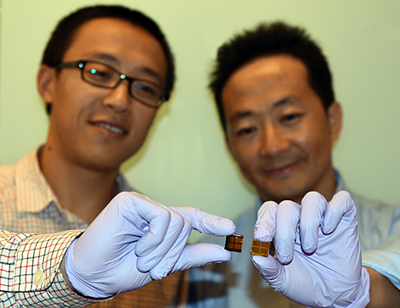 While solar cell technology is currently being researched and developed by a variety of industrial and government entities worldwide, it remains prohibitively expensive to many individuals who would like to utilize it.

Of the many different perovskite formulations that can be used in solar cells, the methylammonium lead iodide perovskite (“MAPbI3”) has been the most-widely studied, says OIST. Solar cells made of this material have achieved efficiencies exceeding 20% and are cheaper to manufacture than silicon. However, their short life spans have prevented them from becoming a viable silicon solar cell alternative.

In order to help create better solar cells in the future, members of the Energy Materials and Surface Sciences Unit at OIST Graduate University have been investigating the cause of the rapid degradation of these perovskite solar cells. The work has just been reported in Nature Energy

Dr. Shenghao Wang, first author of the article in Nature Energy, suggests that the degradation of MAPbI3 perovskites "may not be a fixable issue". His research reveals that iodide-based perovskites will universally produce a gaseous form of iodine, during operation, which in turn causes further degradation of perovskite.

While many researchers have pointed to other sources, such as moisture, atmospheric oxygen and heat as the cause of MAPbI3 degradation, the fact that these solar cells continue to degrade even in the absence of these factors led Dr Wang to believe that a property intrinsic to these PSCs was causing the breakdown of material (see diagram, below).

Dr Wang explained, “We found that these perovskite solar cells are self-exposed to I2 vapor at the onset of degradation, which led to accelerated decomposition of the MAPbI3 perovskite material into PbI2. Because of the relatively high vapor pressure of the iodine, it can quickly permeate the rest of the perovskite material causing damage to the whole cell.”

He added that this research does not rule out the probability of using perovskites in solar cells, however. Professor Yabing Qi, leader of the Energy Materials and Surface Sciences Unit and corresponding author of the work, added, “our experimental results strongly suggest that it is necessary to develop new materials with a reduced concentration of iodine or a reinforced structure that can suppress iodine-induced degradation, in addition to desirable photovoltaic properties.”

The researchers at OIST are continuing to investigate different types of perovskite materials in order to find more efficient, cost-effective, and long lifespan perovskite material suitable for use. Their ultimate goal is to make solar cells that are affordable, efficient and stable so that they will be more accessible to the general population. Hopefully, better, cheaper solar cells will entice more people to utilize this technology.