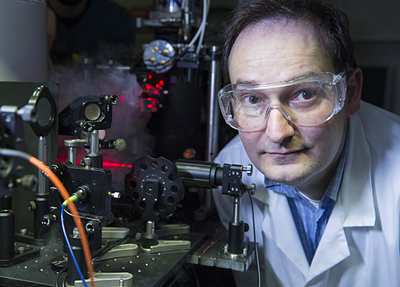 Researchers at the Tyndall Institute in Cork, Ireland, have discovered a new way to enable quantum dot LEDs to produce entangled photons, which can then be positioned where needed – such as in semiconductor boards. The developers describe this achievement as “major progress for building quantum computing at scale, as the materials are readily accessible now”.

Project leader Dr Emanuele Pelucchi, Head of Epitaxy and Physics of Nanostructures and a member of the Science Foundation Ireland-funded Irish Photonic Integration Centre (IPIC) at Tyndall National Institute in Cork, says that this research is likely to be used in future quantum computing developments to accelerate the application of quantum technologies.

Quantum computing is widely considered to be the next revolution in terms of global computing. Google, Intel and IBM are just some of the big names investing millions in this field, which is expected to yield the faster, more efficient processing that will be needed to power the requirements of future computing, high-speed networking, encryption and other applications such as defense, security and sensing.

Dr Pelucchi and his team at Tyndall have made what they call a “quantum leap” by developing a technical step that could enable the use of quantum computers much sooner than expected.

While conventional digital computing relies on binary on-off switches, quantum computing harnesses quantum state of matters – such as entangled photons of light or multiple states of atoms – to encode information. In theory, this can lead to much faster and more powerful computer processing, but the supporting technology is currently difficult to develop at scale.

The Tyndall researchers have worked out how to make quantum dot LEDs that can produce entangled photons (whose actions are linked), which theoretically enables their use to encode information in quantum computing.

This is not the first time that LEDs have been made that can produce entangled photons, but the methods and materials, described in Nature Photonics, have important implications for the future of quantum technologies, explained Dr Pelucchi.

“The new development here is that we have engineered a scalable array of electrically-driven quantum dots using easily-sourced materials and conventional semiconductor fabrication technologies. Our method allows you to direct the position of these sources of entangled photons,” he said.

“Being able to control the positions of the quantum dots and to build them at scale are key factors that will underpin more widespread use of quantum computing technologies as they develop.”

The Tyndall technology uses nanotechnology to electrify arrays of the pyramid-shaped quantum dots so that they produce entangled photons. “We exploit the intrinsic nanoscale properties of the whole pyramidal structure, in particular, an engineered, self-assembled vertical quantum wire, which selectively injects current into the vicinity of a quantum dot,” said Dr Pelucchi. “The reported results are an important step towards the realization of integrated quantum photonic circuits designed for quantum information processing tasks, where thousands or more sources would function in unison.”

Dr Kieran Drain, CEO at Tyndall National Institute, commented, "It is exciting to see how research at Tyndall continues to break new ground, particularly in relation to this development in quantum computing.

"The significant breakthrough made by Dr Pelucchi and his team advances our understanding of how to harness the opportunity and power of quantum computing and undoubtedly accelerates progress in this field internationally. Photonics innovations by the IPIC team at Tyndall are being commercialized across a number sectors and as a result, we are directly driving global innovation through our investment, talent and research in this area," he said.