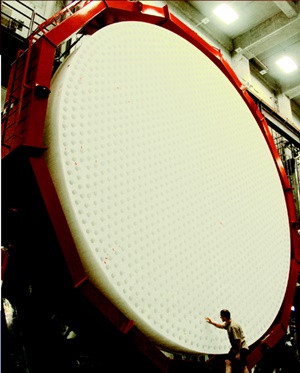 by Ford Burkhart in Tucson
A recent shift in strategy by leaders of Arizona’s $3 billion optics industry was a response to changes in products of global high-technology competitors, regional leaders said.

New products show an integration of elements from optics and photonics with other sectors, the leaders added, prompting a merger between two of the state's representative groups.

“We are reacting to the evolution of the other technologies,” said Bob Breault, founder of the eponymous BRO Research and president of the 300-member Arizona Optics Industry Association (AOIA) that merged with the broader-based Arizona Technology Council in August. “We are embracing them like never before.”

In southern Arizona, known since the early 1990s as America’s “Optics Valley,” the state’s optics industry leaders said that they were taking a big step to compete more vigorously in new markets, by joining the forces of the AOIA, started in 1992, with the ATC. The result will be a new Arizona Optics Industry Committee (AOIC).

The ATC has represented all of Arizona’s strengths in engineering, along with the state’s university-level research expertise. “It’s only prudent that we work with them,” Breault said.

He added that the traditional optics and aerospace fields are still booming in southern Arizona, home of the distinguished College of Optical Sciences, or OSC, started as a center in 1964 with Air Force Institute of Technology backing.

Local strengths
Among the local cluster is Edmund Optics, currently adding an 8,000 square-foot research, design and development space on Tucson’s east side near the facilities of BRO. Edmund, known for its precision lenses, mirrors and other optical components, is adding the space near its current 4,500 square-foot design center.

Meanwhile Arizona Optical Systems (AOS), which makes precision systems for astronomy and aerospace clients, plans to expand its Tucson facility by an additional 30,000 square feet - having only moved into its present facility in January 2015. It will also build a new 10 meter test tower and high bay to support its astronomical programs. The company, a spin-off from the University of Arizona, manufactures optical systems of up to two meters in diameter.

With its steady growth over the past two years, AOS has added 15 new employees, nearly doubling its roster to a total of 32, says company president Marty Valente. One of its key technical strengths is excellence in developing optical metrology systems to measure the optics that it manufactures, he explains.

The firm has recently won two Phase 2 contracts from the US Navy to advance technology to measure, and manufacture, conformal optics, for example domes.

Integration
An associated board member of the previous optics cluster, Valente says that the merger is a chance for Arizona to offer a better-integrated array of optics products. He noted recent growth in the rival Rochester area thanks to the $500 million New York State backing of AIM Photonics, and told a local news site:

“Something like that here could really bring us forward and create a huge economic base.”

Breault remarked that the products displayed by exhibitors at the recent SPIE Optics + Photonics conference in San Diego illustrated the need for the Arizona collaboration between optics firms and the wider technology represented by ATC: unmanned vehicles, drones, new memory chips and multimedia devices.

“There’s a ton of optics in new non-optics products, drones, optics on a chip, medical devices,” he said. "Everybody wants to make virtual reality devices smaller. It’s not the age of the old optics, telescopes and eyeglasses. There’s a need for an interface between what’s going on in the exhibition hall and the technical presentations.

“We need to reach out to these other technologies as they incorporate optics at the nanotech level.”

Raytheon expansion
Reflecting investment from the wider technology community that uses optics, Raytheon Missile Systems is reported to be planning a major expansion in the region that. Citing unnamed Pima County officials, the local Arizona Daily Star said that the defense contractor, which already has about 9600 employees in Tucson, could create 1975 new jobs.

On the ATC side of the new collaboration, Jack Schumann, a director of the AOIA and also a member of the ATC, said the new committee would bring together veterans on the ATC staff for joint efforts on behalf of policy on critical issues. Together they will support area groups in organizing development-oriented events.

In short, the collaboration will add firepower to two veteran teams. “The AOIA will give ATC members access to services provided by a well proven and experienced team of staff and leaders,” Schumann said. “The AOIA, which was founded and managed by volunteers for over 24 years, has made important contributions to Optics Valley Arizona, anchored by the College of Optical Sciences at University of Arizona.”

Breault and Schumann noted that the AOIA has been the blueprint for more than 40 similar optics clusters around the world.

“Under this exciting new optics partnership, we will connect, convene and catalyze the optics sector across the state of Arizona by tapping the expertise and reach of the Arizona Technology Council,” predicted Schumann, recently retired from Mahr-ESDI, a manufacturer of interferometers in Tucson.

Ford Burkhart is a freelance writer in Tucson, Arizona.