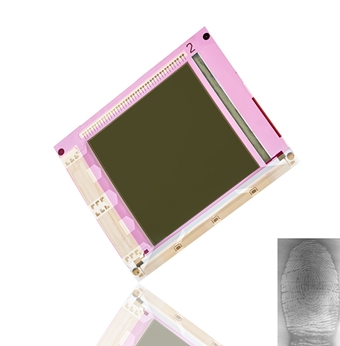 Developers of a new type of flexible plastic image sensor are looking for industrial partners to commercialize the technology for biometric applications.

They have fabricated what is claimed to be the world’s first large-area flexible fingerprint sensor to be based on plastic. Designed for biometric applications, its active area measures 8.6 cm x 8.6 cm and features a pixel pitch of 84 µm.

That equates to just over a megapixel of image resolution (1024 x 1024 pixels) on a host substrate only 0.3 mm thick. The sensor is said to operate at visible and infrared wavelengths up to 900 nm, meaning that it can also be used to image under human skin, for example to look at blood vessels.

Plastic Logic connection
FlexEnable is closely related to the Cambridge University spin-out Plastic Logic, and features many of the same executives and investors on its board of directors. Russian investor Rusnano is among them, while the board also boasts strong photonics expertise in the form of CEO Chuck Milligan and director Henning Sirringhaus.

Milligan was previously CEO at micro-optics firm Heptagon and prior to that held senior roles at component makers JDSU and Bookham Technology, while Sirringhaus - the Hitachi Professor of Electron Device Physics at Cambridge's famed Cavendish Laboratory - co-founded both Plastic Logic and organic photovoltaics firm Eight19.

The team says that the key step in the development of the new sensor was to deposit ISORG's organic photodetectors onto FlexEnable's plastic organic thin-film transistor backplanes.

The result is a flexible fingerprint sensor that is ultra-thin, light and robust, and which does not require a lens. In a joint company announcement Milligan described the technology as having “game-changing capabilities for biometric detection”, and added:

“[The flexible sensor] can be applied to almost any surface – anything from door handles to wrists. For example, imagine a mobile device whose surface or edges know who is holding or touching the device. Such capabilities are viable because of the flexibility, thinness, and much lower cost per unit area compared to silicon area sensors.”

Steering wheel ID
FlexEnable also claims: “The large, label-thin sensing area can even wrapped around the objects in our daily lives that we typically come into contact with - such as a car steering wheel that recognizes the driver as soon as the wheel is touched, or a credit card with integrated biometric detection that does not compromise current form factors.”

According to the company the large area of the sensors also allow more information to be collected, which should lead to both higher security and a lower false rejection rate. It believes that while fingerprint sensors of that size are prohibitively expensive when based on silicon electronics, the flexible sensors will be much cheaper as they can be printed on plastic at a low temperature.

“Moreover, fingerprint sensors made of plastic have similar optical performances to conventional optical fingerprint sensors such as sensitivity, linearity, and low noise, but without the need for expensive and bulky optics,” FlexEnable says, adding that vein imaging could be adopted as a second level of security in biometric devices.

Technological heritage
While FlexEnable’s roots are in Cambridge University’s Cavendish Laboratory and its spin-off Plastic Logic, ISORG's technological pedigree comes from the CEA Liten printed electronics laboratory, from which it spun out in 2010.

In 2014, ISORG raised €8.4 million in a series A venture round of financing, with which it planned to scale the organic photodiode technology to volume production.

CEO Jean-Yves Gomez predicted of the FlexEnable collaboration: “This breakthrough development will spark the creation of next-generation products in biometrics. No other solution can offer large-area sensing as well as fingerprint and vein recognition while being flexible, light and robust.”

While the two companies are actively seeking industry partners to commercialize the technology, Gomez added that the team would be able to provide reference designs as well as image improvement algorithms and illumination solutions to help with sensor integration for new applications.

• Any potential partner interested in collaborating with FlexEnable and ISORG on commercialization is invited to contact Flexenable at imaging@flexenable.com.