Modified micro-structure of the semiconductor surface plays an important role in THz generation. 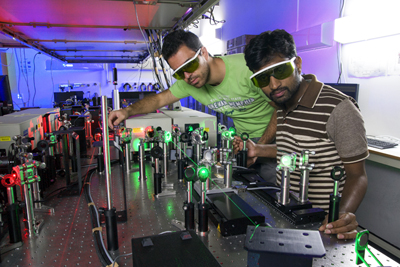 Technologies based on terahertz radiation are transforming various branches of science from rapid wireless transfer of data to easier detection of explosives, weapons, or harmful gases, to safe 3D medical imaging and advances in spectroscopy. However, scientists and engineers still do not have cheap and efficient solutions for mass production of terahertz-based devices.

But new research, recently published in Optics Letters by the Femtosecond Spectroscopy Unit at the Okinawa Institute of Science and Technology (OIST), Japan, proposes a possible solution to the problem some call the “terahertz gap”: a method to increase efficiency of THz emission gallium arsenide-based devices.

Terahertz radiation, which lies between infrared and microwave radiation in the electro-magnetic spectrum, is absorbed by water, which can limit the use of THz devices in the Earth's water vapor-laden atmosphere, to relatively short distances, although it can penetrate fabrics, paper, cardboard, plastics, wood, and ceramics.

Traditionally, the generation of THz waves has proved difficult since the frequency is too high for conventional radio transmitters, but too low for optical transmitters, like the majority of lasers. Therefore, researchers have needed to come up with new innovative devices.

One of the most frequently used THz emitters is a photoconductive antenna, comprising two electric contacts and a thin film of semiconductor, often GaAs, between them. When the antenna is exposed to a short pulse from a laser, the photons excite electrons in the semiconductor, and a short burst of THz radiation is produced. Thus the energy of the laser beam is transformed into a THz electro-magnetic wave.

The OIST researchers showed that micro-structure of the semiconductor surface plays an important role in this process. Femtosecond-laser-ablation, in which the material is exposed to ultrashort bursts of high energy, creates micrometre-scale grooves and ripples on the surface of GaAs (see right).

“The light gets trapped in these ripples”, says Athanasios Margiolakis, a Special Research Student at OIST. "Since more light is absorbed by the ablated material, the efficiency of THz emission, given a sufficiently powerful laser, increases by 65%. Other properties of the material change as well. For example, ablated GaAs shows only a third of the electrical current of non-ablated GaAs. We observe counter-intuitive phenomena.

“One generally expects that the material showing the higher photocurrent would give the best THz emitter.” They explain this phenomenon by shorter carrier lifetimes. That is, electrons in ablated samples return to non-agitated states much faster than in control samples."

Dr Julien Madéo, one of the OIST team members, added, “femtosecond-laser ablation allows us to engineer the properties of materials and to overcome their intrinsic limitations, leading, for example, to near 100% photon absorption as well as broader absorption bandwidth, control of the electron concentration and lifetime”. This technique is a fast, lower-cost alternative to existing methods of manufacturing materials for THz applications.