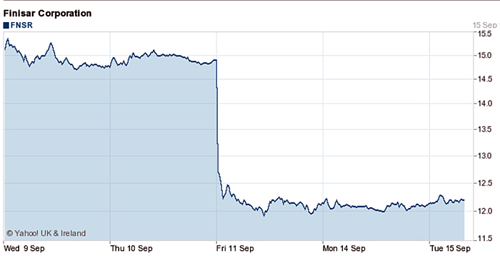 Finisar’s share price last week fell by 14% to its lowest levels since 2012.

Finisar’s share price last week fell by 14% to its lowest levels since 2012 after missing its own Q1 forecast, providing flat Q2 guidance, and announcing that chairman Jerry Rawls is to replace Eitan Gertel as CEO, a role Rawls previously held until 2008. Gertel left the company at the end of last week.

During Finisar's earnings call, Rawls noted that the company will continue to "see a high level of competition" and he is aiming to cut operating expenses to around 20% of revenue from the latest quarter’s 22%. Rawls told the analysts conference, which followe the results announcement, that 25G/100G Ethernet data center upgrade cycles would drive Finisar’s growth next year.

CFO Kurt Adzema said that wireless and legacy 100G datacom component sales had been “soft” in Q1, commenting, "The lower end [10G and below] products always face competition from non-tier 1 companies but in some period of time, whether one or three years or whatever the period, the tier 2 competitors will always catch up.” 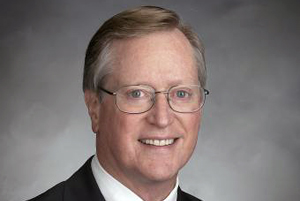 Considering the latest quarter’s performance in some detail, Jerry Rawls, who is also Executive Chairman of the Board, commented, "Revenues for our first fiscal quarter were $314m compared to $320m in the prior quarter; however, the prior quarter had the benefit of an additional week. Strength in revenue was primarily driven by 40 gigabit transceivers for datacom applications.”

Highlights from the company’s own financial statement for the first quarter of fiscal 2016 were as follow (all % change figures are in relation to preceding quarter’s statement):