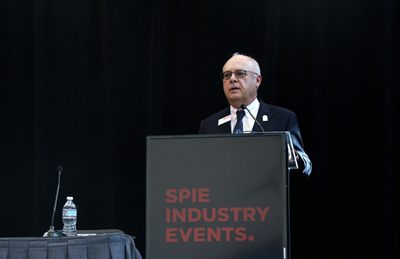 The value of annual sales in the global photonics market has been revised upwards to $182bn, according to new analysis by SPIE, the international society for optics and photonics (and owner of optics.org). The new results were presented by SPIE’s Industry and Market Strategist Steve Anderson at the Optics+Photonics expo exhibitors’ meeting in San Diego.

On the basis of research performed to 2012, Anderson had previously assessed the annual value of the photonics market to be $160bn but SPIE has been working over the past two years to refine its list of key industry players and their sales.

He described the updated analysis as “valuable information for industry leaders and academic researchers seeking to communicate the impact of the field." These data have become more important in recent years, not just for forecasting and supporting investment, but increasingly at the political level with developments such as the US National Photonics Initiative and the EC’s Horizon 2020 programs, into which serious state money and policies are being directed.

Anderson explained how the list had been refined and how the significant changes identified: ”In updating the 2012 dataset of 2713 companies, we took 193 out and 674 were added so we ended up with a net change of 481. Of these, 305 Asian companies were added, 91 European, and 81 from the US. The reason that there was a lot more activity added in Asia was that, since 2012, a lot of Chinese companies have been coming out of their shells, wanting to export more. At the same time, SPIE’s assessment procedure has been improved."

Big players own 70% of business

Investigating the data reveals much about recent business trends with photonics companies: “Since 2012, most companies added were in the under-$10m and $10m-to-$50m turnover categories. About three-quarters of firms are still SMEs, with under $10m annual business. The majority of the revenues are still generated from the minority of companies: just 63 companies from the 3194 total 2014 sample account for 70% of the total business while the remaining 2384 companies account for only 4% of total sales.”

What SPIE’s latest survey found to be different from just two years ago is that the industry’s job distribution is more even across the companies than is the distribution of revenues. Anderson commented, “We still clearly have the bias towards larger companies in terms of employment but in 2014 the picture is a little more spread out.”

One measure of companies' operating efficiency and performance is the sales ratio, measurable in dollars per employee. In the 2014 analysis, the average yield per head was down from $230,000 (2012) to $211,000. “This is accounted for by the addition of many new Asian companies to the database,” he explained. “Although, in the US the 2014 performance figure is around $260,000 per employee.”

Anderson highlighted an interesting element from the latest analysis. “If you look at the company count by country, the top five host countries are ranked: US, China, Japan, Germany and France, as we expected. But if you look at the where the revenues are coming from, you will see a very different picture. Almost half of the total revenues come from Japan and if you look at Japan and US together then you are looking at 73% of total global revenues, which is actually down from their 80% joint total in 2012.”