Implant from developer Second Sight had previously only been used to aid patients suffering from retinitis pigmentosa. 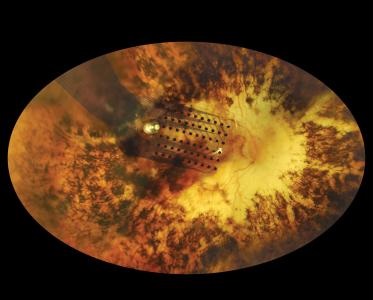 A retinal prosthesis has for the first time been used to restore some useful vision to a patient with the dry form of age-related macular degeneration (AMD) – the leading cause of blindness in the developed world.

The “Argus II” device, made by the US company Second Sight, was implanted by Paulo Stanga, a consultant ophthalmologist at the Manchester Royal Eye Hospital, UK, and a professor of ophthalmology and retinal degeneration at the University of Manchester.

80-year old Ray Flynn, whose dry AMD was at an advanced stage, had surgery to fit the device last month. Two weeks later, the implant was activated, with a report from the BBC suggesting that Flynn was now able to see the outline of people and objects, having previously lost vision in the central area of his field of view.

Surgeon Stanga said: “The goal in restoring this central vision is to provide individuals with AMD more natural vision and ultimately improve their independence and quality of life. This is totally groundbreaking research, where positive results from the study could provide advanced dry AMD patients with a new alternative treatment.”

The Argus II implant has previously been implanted in patients suffering from retinitis pigmentosa, another debilitating disease of the retina but one that tends to affect peripheral vision first. AMD is believed to be the cause of blindness in two million individuals worldwide, with another 375,000 blinded by retinitis pigmentosa.

Feasibility study for AMD
Second Sight said that the Manchester milestone represented the start of a feasibility study to evaluate how effective its implants are for helping patients with dry AMD. The device has already been tested and approved in the US and Europe for individuals with retinitis pigmentosa and outer retinal degeneration, respectively.

Eligibility for this latest study includes patients between 25 and 85 years of age with advanced dry AMD, some residual light perception, and a previous history of useful form vision. Study subjects will be followed for three years to evaluate safety and utility of the Argus II system on visual function.

If those results are positive, Second Sight says it plans to conduct a larger study to support market approvals. Its CEO Robert Greenberg, said: "We are very excited to begin such an important study for this patient population and to have the opportunity to help a great deal more people living with blindness. Though it is obviously still early in this clinical trial, we are very encouraged by these initial results.”

To produce images, the Argus II bypasses patients’ damaged photoreceptors. Instead, a moving image captured by a small camera housed in a pair of glasses is sent to a video processing unit and transformed into instructions that are returned to the glasses via a cable.

Those instructions are then transmitted wirelessly to an antenna in the implant, which is attached surgically to the damaged retina. The electrical signals received are intended to stimulate the retina’s remaining cells, and transmit some visual information along the optic nerve to the brain, which can learn to interpret the signals as visual patterns.

30-patient trial looks positive
The AMD study has begun shortly after Second Sight said that a three-year, multi-center clinical trial on 30 patients had shown positive results. Long-term studies are crucial because earlier attempts to implant other retinal prostheses have seen a number of adverse events, partly related to degradation of the device itself.

An open-access paper published by the American Academy of Ophthalmology (AAO) and entitled "Long-Term Results from an Epiretinal Prosthesis to Restore Sight to the Blind" details clinical results from ten medical centers across the US and Europe. All the patients received the implants between June 2007 and August 2009.

Of the 30 subjects tested, 29 still had a functioning Argus II system three years after surgery. And although the study also noted 23 “serious adverse events” relating to either the device itself or the surgical procedure – most of which occurred within six months of surgery – the study authors reported the Argus II to be “extremely reliable and stable”.

Lead author Allen Ho, the director of retina research at Wills Eye Hospital in Philadelphia, and a professor of ophthalmology at Thomas Jefferson University, said: “The data from this study is quite remarkable for these patients who, previously, had little to no light perception, living in a world that we could consider complete darkness.”

He added: "The fact that these individuals have increased independence, being able to navigate through their home, walk through doorways and cross streets, is truly life changing."

In the conclusions of the paper, Ho and colleagues added a note of caution, writing: “It is difficult to reach definitive conclusions about safety from this small study. Retinitis pigmentosa is a rare disease, and patients with almost total loss of vision from [it] are rarer still.”

But they also noted: “With only 30 subjects, statistical power is low. Among those 30 subjects, however, there were no lost eyes, all events were treated with standard ophthalmological techniques, and there were no unexpected events.”

Orion implant now in animal testing
Responding to the findings, Second Sight CEO Greenberg said the company was "thrilled” with the results, adding:

"Of course, this is only the beginning. We are constantly making improvements in our technology and are striving to greatly improve image quality and resolution for the Argus II.”

He adds that the company is now working on a new device, called the “Orion I Cortical Visual Prosthesis”, which it is hoped will be able to treat nearly all causes of blindness.

The Orion devices are similar to the Argus II, but designed to be attached to the visual cortex within the brain – therefore bypassing both the retina and optic nerve altogether.

Earlier this year the first Orion devices were implanted in animals to evaluate fit, form, stability, and biocompatibility. Human trials are currently earmarked to begin in early 2017.

“This potentially offers hope for treating patients with nearly all forms of blindness where the optic nerve or retina is completely damaged, as in glaucoma, diabetic retinopathy, retinal detachments, trauma, infection, and others,” claims Second Sight. “The population of legally blind people potentially eligible for the Orion I is about 6 million worldwide.”