Fraunhofer IOF hoping that new look and corrective function will drive up sales; see them in Munich. 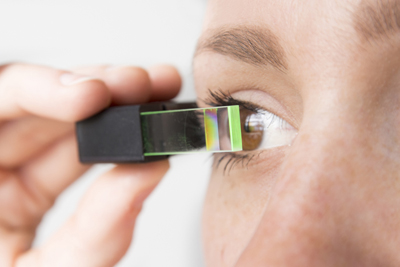 Smart eyewear reesearchers at the Fraunhofer Institute for Applied Optics and Precision Engineering IOF in Jena, Germany, have now developed a technology that allows data glasses to be produced in small, unobtrusive designs. The new glasses, which are to be demonstrated at Laser World of Photonics, later this month in Munich, also correct for farsightedness.

Confident that the new design will have greater appeal to the public, the IOF stated, “Data glasses have tended to be chunky, unstylish objects, so it’s no wonder they haven’t caught on among general consumers.”

But besides the glasses’ ability to display navigation data taken from a wearer’s smartphone directly into the field of view, they will also remove the apparent design problem of “cumbersome frames”. The previously “awkward” designs have meant that few private users have been keen to wear t. “We have designed our glasses to be small and discreet,” said Dr. Peter Schreiber, group manager in the Microoptical Systems department at Fraunhofer IOF.

Data glasses typically consist of two parts: a micro-display that generates the image and an optics that projects the image on the desired viewing position. Both units are attached to the temple (earpiece). Although the micro-display of the new glasses measures 8x15mm, making it a similar size to conventional models, the optics are only 5mm long, almost one-fifth the length of previous designs. Instead of having single long optics, the scientists have placed the optical components alongside each other in an array. “This allows us to obtain the same results with a much shorter structure,” said Schreiber.

While commercially available data glasses often project the image or information on the edge of the field of view – for example, users conventionally have to look up and to the right – viewers using the IOF design see the information precisely where the context dictates it should be. For example, when using the glasses to inspect a historic view, the description will be placed virtually beside the monument the wearer is looking at.

To achieve this, the researchers apply a nanoscale lattice structure – invisible to the human eye – to a glass plate, purposing it as light guide. In short: the optical image is coupled into the light guide through a lattice, guided to the required position, coupled back out through a lattice there, and reflected into the wearer’s field of view. “The manufacturing methods are suitable for large-scale production and are already used in the industry, so making the glasses is easy and cost-effective,” says Schreiber.

People who need spectacles to read usually also have difficulties reading the information displayed in data glasses. However, Fraunhofer IOF’s new glasses correct for farsightedness. “Our multi-channel approach compensates for farsightedness without any moving mechanical parts, such as the adjustable eyepiece in binoculars, and to set the focus for each wearer by purely electronic means,” said Schreiber. For users, this means entering their vision defect data in the corresponding app on their smartphone, which sends the relevant content and information to the glasses via Bluetooth. Everything else takes place automatically: the glasses adjust the display images in such a way that they appear sharp to users. The glasses are also able to partly compensate for other vision problems, such as astigmatism and shortsightedness.

Applications for the data glasses are not limited to tourism: wearers could view their personal intensity levels and heart rate while exercising or playing sport. And the glasses could also help people in their everyday working lives: for instance, mechanics responsible for maintaining and repairing machinery would no longer have to lug around hefty manuals; instead, the work steps could be displayed directly into their field of vision. At Laser World of Photonics (June 22 to 25, in Munich) the Fraunhofer IOF will present a demonstrator model (Hall B3, Booth 341).