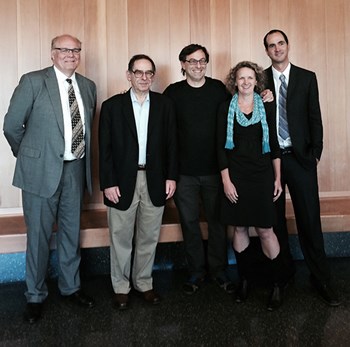 The microscopy and optics giant Zeiss has delivered a suite of state-of-the-art equipment to the University of California, Berkeley, that it is hoped will revolutionize our understanding of the human brain – and the diseases that damage it.

The tools, acquired as part of a public-private partnership under President Obama’s “BRAIN” grand challenge initiative, include multiphoton and confocal microscopes, as well as a light-sheet imaging system with special optics for tissue clearing – a technique for making tissues transparent and easier to probe at certain wavelengths.

They will be used by researchers within Berkeley’s Brain Microscopy Innovation Center (BrainMIC), part of the wider Berkeley BRAIN Initiative. The mission of BrainMIC is to provide the technology and training required to make new optical tools accessible to the broad neuroscience community.

Two of those grants were from the National Institute of Mental Health (NIMH), and designed to improve brain imaging tools and establish a catalog of the thousands of different types of neurons that are known to exist. Scientists still have little or no idea exactly what functions most of those neurons perform.

Alongside that, the $5.6 million collaboration between Zeiss and Berkeley is intended to fast-track microscopy development for emerging neurotechnologies. It will include an annual course to teach researchers how to use the new technologies, the first of which is due to take place in January 2016.

Powerful tools
That collaboration was launched officially on May 28 at Berkeley, with Zeiss Microscopy USA president James Sharp speaking along with Ehud Isacoff, director of the Helen Wills Neuroscience Institute at Berkeley, and Holly Aaron, manager of BrainMIC. Steven Martin, the dean of biological sciences at Berkeley, and Sharif Taha, scientific program officer at The Kavli Foundation, also spoke.

Aaron said: "There has been a rapid advance in the optical tools available to detect and control neuronal activity and synaptic transmission. These powerful tools are an important and exciting step toward deciphering the neuronal circuits that command essential brain functions, such as perception, movement, and memory.

"However, for these tools to yield breakthrough discoveries there is a need for commercially available microscopes that are optimized for use with emerging neurotechnologies. Zeiss’s participation will help us meet that need."

Zeiss says that the equipment installed in the first phase of the collaboration includes two LSM 880s, one with an Airyscan multiphoton confocal microscope for super-resolution studies, and a second with OPO capabilities for deep-tissue imaging. It has also provided a Lightsheet Z.1 light sheet imaging system with special optics for cleared tissue samples, and an Axio Scan.Z1 digital slide scanning system.

The Jena-headquartered firm says that the tools will be updated as part of the partnership, while the Berkeley researchers will offer feedback on any new or special neurotechnology needs - helping Zeiss develop future products best suited for neuroscience research.