Formal partnership to establish a new optics and photonics research hub in the Canadian city is signed. 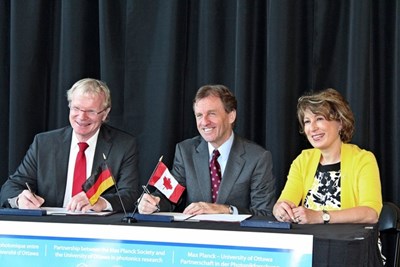 Senior representatives from the University of Ottawa and Germany's Max Planck Society have signed a memorandum of understanding to establish a new research center in the Canadian city dedicated to cutting-edge optics and photonics.

The Centre for Extreme and Quantum Photonics, which will become just the third Max Planck institution in North America, is set to hook up two of the world’s leading photonics research teams.

Among the principal researchers involved in the new center are the attosecond physicist Paul Corkum, nonlinear optics expert Robert Boyd, and surface plasmon specialist Pierre Berini - all based in Ottawa.

Signing the memorandum of understanding, University of Ottawa vice president for research Mona Nemer said: “The University and the Max Planck Society are both internationally renowned for research excellence in photonics. Deepening our ties means we will foster greater scientific exchange, produce highly qualified people and develop solutions to real-world problems.”

She was joined by Allan Rock, the University of Ottawa president, and Ferdi Schüth, vice president of the Max Planck Society, for the signing ceremony.

International exchanges for young researchers
Among the expected activities of the new center will be the development of very high intensity laser sources for advanced materials processing, quantum photonics for secure data transmission over optical fiber systems, and the fabrication of new devices for use in both classical and quantum photonics.

However, the partners add that the cornerstone of the effort will be to provide young researchers with international exchanges between the two world-leading institutes in Canada and Germany, giving them the opportunity to explore different scientific cultures at an early stage of their professional development.

Attending the signing ceremony Eugene Arthurs, CEO of the optics and photonics society (and optics.org publisher) SPIE, said: “SPIE welcomes this important partnership, and congratulates the university and the Max Planck Society for their influence on photonics research across Canada and all of North America.”

He added: “The new center will generate many downstream benefits, beginning with a higher awareness among decision makers of the key role of photonics in our daily lives.”

Back in 2012, the University of Ottawa unveiled ambitious plans to establish itself as a "photonics world capital", partly through the construction of an Advanced Research Complex (ARC) to house state-of-the-art photonics and geoscience laboratories.

The Ottawa location is also synonymous with some of the biggest names in commercial photonics, with companies including JDSU, Cisco Systems and Ciena having close ties with the area.