JDSU on track with business split 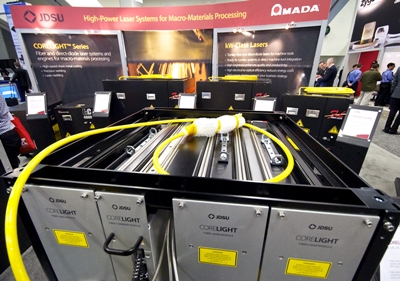 The optical components and lasers division at JDSU – soon to become a separate company known as “Lumentum” – has reported a slowdown in sales of high-power fiber lasers.

At $195.2 million, divisional revenues were up very slightly compared with a year ago, but that masked a 20 per cent sequential decline in commercial laser sales, to $31.5 million.

Alan Lowe, who currently heads up the division and is set to become Lumentum’s CEO when the JDSU split takes place later this year, attributed the decline to a seasonal slowdown in a quarter that included the Chinese New Year, as well as what he believes is a temporary slump in sales of high-power fiber lasers.

However, he reckons that sales of fiber lasers will bounce back towards the end of calendar 2015, as Lumentum looks to sell the “Corelight” products recently launched at the Photonics West exhibition beyond development partner Amada, and starts to feel the benefits of a new partnership with Laser 2000.

Laser 2000 distribution deal
JDSU signed an exclusive deal with the Munich, Germany, distributor last month, and when questioned about that agreement by investors Lowe said:

“This puts a lot more feet on the street [sic], knocking on doors and opening up opportunities for us to sell fiber lasers outside of our main partner. That's the primary reason for the agreement with Laser 2000. They're a good group of people and they have a sales force that's already out knocking on doors.”

“We still don’t have revenues outside of our main customer, Amada,” he said. “[But] we have a whole portfolio of products that we announced at Photonics West that I think over the next year or so we should be able to add to our customer base.”Regarding some of the other lasers in the JDSU portfolio, aimed at “micro” scale materials processing applications, he said:

“Higher-power versions of our Q-switched solid state and ultrafast lasers specifically designed for OEM machine tool applications are being designed into our customers' tools now. Manufacturing these lasers using our low-cost contract manufacturing model positions us well in the micro material processing market.”

Overall, he is expecting the commercial lasers division to grow at an average rate of around 5 per cent each year following the Lumentum separation – although revenues from high-power fiber lasers, direct-diode sources, and ultrafast lasers should expand at more like 15 per cent.

Gesture sensing migrates to PCs
However, Lumentum’s overall sales will remain dominated by products destined for applications in various forms of optical communications. These came in at $163.7 million in the latest quarter – exactly the same figure reported this time last year.

Among the major variables in that part of the Lumentum mix are sales of devices used in 3D sensing applications. And although they have declined to a low point in recent months, Lowe is hopeful that new deployments in high-end PC applications will help to spark wider uptake.

“We expect 3D sensing revenue to gradually recover as we have started to shift production units for new PCs and other electronics device applications,” he said. “We believe this business could strengthen further over the longer-term as more consumer electronic devices increasingly incorporate 3D sensing capabilities.”

When questioned about that, JDSU’s CEO Tom Waechter declined to say whether or not JDSU was working with Intel on those PC applications, but noted:

“[The] PC applications that we're participating on are typically high end today. When or if that transfers down into the mid-range or the $599 PC, that’s really where the sweet spot is. We're not there yet, [but] I would say that when that happens we should be able to see that business pick up dramatically.”

At the Consumer Electronics Show (CES) in Las Vegas earlier this year, Intel's CEO Brian Krzanich said in a keynote talk that 2015 would go down as a turning point in the history of consumer electronics - thanks in part to 3D and gesture sensing based on photonics:

Central to his thesis were both the gesture-controlled devices enabled by the optical technologies and sensors in platforms like RealSense – which can see and understand depth, allowing the focus of a photo to be altered after it is captured - and wearable technologies like wristbands and fingertip pulse oximeters.