EOLOS system for offshore wind applications is based on continuous-wave Zephir technology. 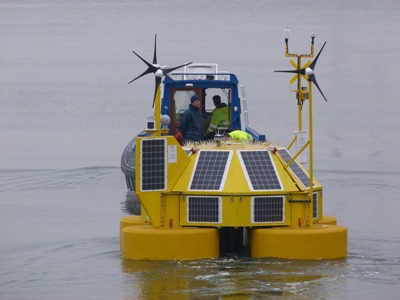 All at sea: the EOLOS floating LIDAR

The European Institute of Innovation and Technology (EIT) has recognized two photonics-based products in its annual awards ceremony.

The independent body, set up as part of the European Union in 2008 to spur entrepreneurship and innovation in the region, handed its “CHANGE” award to the designer of an affordable solar-powered LED lamp, and its “Innovators” award to Spanish firm EOLOS Floating Lidar Solutions for its buoy-mounted light detection and ranging (LIDAR) system – intended to help lower the cost of offshore wind energy.

“We detected a gap in the market, and that has been the inspiration for the project – developing a cost-effective, versatile and accurate system that can measure wind speeds up to 200 meters above sea level at any off-shore location.”

Currently, wind farm developers use meteorological masts that are fixed to the sea bed to take those measurements, but that approach is both expensive and cumbersome. According to Neptune project partner the Catalonia Institute for Energy Research (IREC), fixed masts can cost up to €10 million and take years to deploy because of various environmental and permit restrictions.

According to another partner, the German energy giant RWE, a floating LiDAR system should cost only 10-20 percent of the conventional mast, offering “huge” potential to reduce the development costs of offshore wind farms.

At the heart of the EOLOS system is UK firm ZephIR's LIDAR technology, based around a very stable and continuous-wave laser. It measures wind speeds remotely by using the Doppler effect, detecting the small frequency shifts of light that is back-scattered by tiny particles in the air around the test site.

Validation trials
Receiving the EIT award, Aghabi added: “The main result of the [Neptune] project was creating a spin-off that is currently operating, and I’m hoping that we manage to overcome the next phases [of the project] and be successful in the market and commercialize this product.”

Aghabi also pointed out that the EOLOS system is unique in that it is powered exclusively by renewable energy – photos show it covered by solar cells on all sides – and batteries. “It’s modular, so it’s easy to deploy and cost-effective to transport,” he said.

RWE is currently involved in what it says is the world’s largest validation trial of floating LIDAR, part of a research initiative backed by the UK’s Carbon Trust and involving the major offshore wind farm operators. The first trial, conducted in 2014, took place in Dutch waters and was supported by the country’s own government-backed “Far and Large Offshore Wind (FLOW)” research program.

“By testing different floating LIDAR units we help to increase the confidence in this innovative technology and to reduce cost for offshore wind in the long-term,” said project manager Niels Bijkersma from RWE Innogy. “At the same time we allow individual manufacturers to work towards the commercial acceptance of their buoys while gaining some valuable hands-on experience for our own projects.”

Compelling results
One of the other project partners is Madrid-based Fugro OCEANOR, a subsidiary of Norway’s Fugro group. Its project manager Lasse Lønseth commented: “The tests demonstrated the very high accuracy in the wind profile measurements from the buoy-based LiDAR compared to the accurate mast-based sensors.

The plan now is to deploy the measuring buoy at a wind farm under development in Navitus Bay, off the south coast of England, and site of a 50-50 joint venture between Eneco and EDF Energy.

Ruben Dijkstra, director of Eneco’s offshore wind division, said: “The test results were compelling. It is the first time that we will receive wind and wave data from a mobile measuring buoy during the development and construction of our wind farm. This will make us more flexible and cut costs.”

• Also at last week's EIT awards, Govinda Upadhyay picked up the EIT CHANGE Award thanks to his solar-powered “LEDSafari” lamp – described as an affordable, do-it-yourself technology that can be made with easily sourced components available anywhere in the world.

He said: “This win was a team effort and really down to the support from everyone involved including my EIT family. What’s really different about our solution is that we teach our customers how to build it themselves customised to their own needs. This is an excellent tool to learn about solar technology design while reducing the use of fuels like kerosene in developing countries.”