Technology developed by Research Frontiers appears on top of US Pavilion at World’s Fair expo. 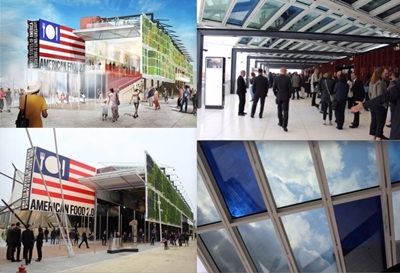 What is claimed to be the world’s largest “smart” glass roof is now on show at the World’s Fair in Milan, Italy.

The 10,000 square-foot, 312-panel structure, which can switch rapidly between opaque and transparent states, is based on an electrically controlled film developed and licensed by the US company Research Frontiers.

Two of its licensees – materials firm Hitachi Chemical and Italian glass specialist Isoclima – collaborated on the latest installation, which forms the roof of the US pavilion at the Expo Milano.

In a release from Research Frontiers James Biber, the New York based architect who designed the US pavilion, said that each of the 1 m x 3 m smart-glass panels can also act as pixels, to create huge display messages in the roof of the building.

"We wanted to also give visitors the ability to control each window in an entire section of the roof using a touch screen,” Biber said. “Also, because the control system for the glass allows instant and precise control over all 312 windows in the roof, this allows us to program the roof to achieve maximum energy efficiency based upon time of day, position of the sun, and ambient weather conditions."

“Light valves”
Described by Research Frontiers as “light valve” technology, the films are based around a liquid suspension full of light-absorbing microscopic particles. That emulsion is trapped between two plastic substrates that are coated with a transparent conductive material, and when a voltage is applied the particles align to let light through and make the panels transparent.

The level of transparency can be carefully controlled by adjusting the voltage, says the US firm, whose technology can also be found in aircraft windows, boats and cars – last November the company said that the Mercedes-Maybach S 600 would feature a smart-glass sunroof, while a Lincoln Continental concept car featuring the technology appeared at last month’s Shanghai Motor Show.

Research Frontiers says that its approach is better than the electrochromic windows installed by Boeing on its 787 Dreamliner aircraft, which have come in for criticism because they do not dim the cabin sufficiently for long-haul flights at night, and are slow to change transparency levels.

However, the apparently growing popularity of the company’s smart glass does not seem to have had much of an impact on Research Frontiers’ business yet. In its “10-K” annual filing with the US Securities & Exchange Commission, the company reported a full-year net loss of $4.4 million for 2014, on revenues of only $1.6 million.

The Woodbury, New York, firm is set to announce its latest quarterly results on May 7. The smart-glass roof can be seen at Expo Milano through October 31 this year.