Process of taste sensation on the tongue analyzed by combination of infrared illumination and multiphoton microscopy. 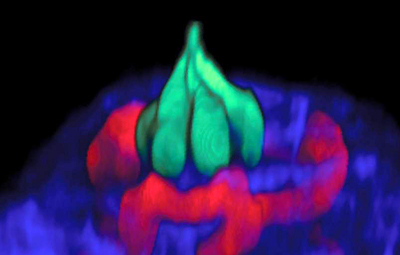 Tasty: Image of a mouse tastebud in action.

There are more than 2,000 taste buds on the human tongue, which can distinguish at least five tastes: salty, sweet, sour, bitter and umami. However the relationship between the many taste cells within a taste bud, and human perception of taste has been a longstanding mystery.

Now a team of scientists have for the first time captured live images of the process of taste sensation on the tongue using a combination of infrared illumination and intravital multiphoton microscopy. The international team from ANU, Australia, Harvard, USA, and Sungkyunkwan University, Korea, imaged single cells on the tongue of a mouse with a specially designed microscope system. The research has been published in Nature’s Scientific Reports.

The team also discovered that taste cells responded not only to molecules contacting the surface of the tongue, but also to molecules in the blood circulation. Assistant Professor Myunghwan (Mark) Choi, from Sungkyunkwan University in South Korea, commented, “We were surprised by the close association between taste cells and blood vessels around them. We think that tasting might be more complex than we expected, and involve an interaction between the food taken orally and blood composition.” 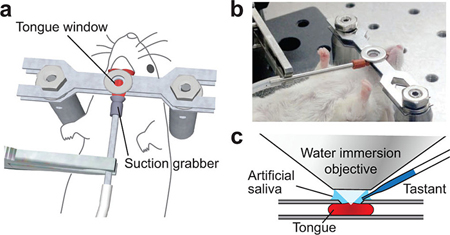 The team imaged the tongue by shining a bright infrared laser on to the mouse's tongue, which caused different parts of the tongue and the flavour molecules to fluoresce. The fluorescence from the tongue was captured with a technique known as intravital multiphoton microscopy. They were able to pick out the individual taste cells within each taste bud, as well as blood vessels up to 240 microns below the surface of the tongue.

The team says this breakthrough complements recent studies by other research groups that identified the areas in the brain associated with taste. They are now hoping to develop a new experiment to monitor the brain while imaging the tongue to track the full process of taste sensation. Dr Lee said, “However to fully understand the complex interactions that form our basic sense of taste could take years. Until we can simultaneously capture both the neurological and physiological events, we can't fully unravel the logic behind taste."

The Scientific Reports article reports, “Intravital microscopy is a powerful tool in neuroscience but has not been adapted to the taste sensory organ due to anatomical constraint. [The team] has developed an imaging window to facilitate microscopic access to the murine tongue in vivo. Real-time two-photon microscopy allowed the visualisation of three-dimensional microanatomy of the intact tongue mucosa and functional activity of taste cells in response to topically administered tastants in live mice. 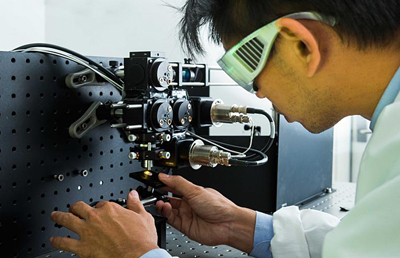 “Video microscopy also showed the calcium activity of taste cells elicited by small-sized tastants in the blood circulation. Molecular kinetic analysis suggested that intravascular taste sensation takes place at the microvilli on the apical side of taste cells after diffusion of the molecules through the pericellular capillaries and tight junctions in the taste bud. Our results demonstrate the capabilities and utilities of the new tool for taste research, also in vivo.

Other applications: cancer research and treatments

The team also reports on further possible applications of their technique:

"Beyond taste sensation, intravital tongue imaging is expected to provide a wide range of applications, particularly for pathogenesis and homeostatic maintenance, by allowing longitudinal observation of cellular dynamics over prolonged period of time. The lingual keratinized epithelial cells constituting the filiform papillae are one of the most rapidly regenerating cells in the body, with a typical turn over time of 10 days in human. Their rapid proliferation is closely associated with the genesis of squamous cell carcinoma31 and oral mucositis after cancer therapy.

"Observing cellular dynamics during the disease progression and therapeutic interventions would facilitate deeper understanding on cellular mechanisms. Moreover, dynamic repopulation of the taste cells, and their renewed connectivity to the afferent nerve fibers should offer an exciting model to study highly orchestrated cellular maintenance and plasticity. Structural and functional mapping of vascular network in the taste bud may also be useful to elucidate the functional role of vascular perfusion in peripheral taste sensation and to measure the potential spatiotemporal correlation (i.e. neurovascular coupling) between neuronal activity and vascular perfusion in the tongue."