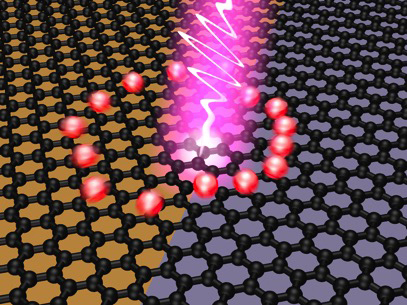 Infrared light absorption at the interface between two graphene areas.

Scientists affiliated with Europe’s Graphene Flagship develop a photodetector that converts incident light into electrical signals on femtosecond timescales, enabling ultrafast operation speeds for electronic circuits in optical communications and various other applications. The Graphene Flagship is the EU’s biggest ever research initiative to date. With a budget of €1 billion, it claims to represent “a new form of joint, coordinated research on an unprecedented scale”.

Graphene has long been considered a promising material for ultrafast, broadband photodetectors, the performance of which is dependent on switching speed. Efficient carrier heating is what distinguishes the photodetector developed by physicists at the Institute for Photonic Sciences (ICFO) in Barcelona, together with colleagues in the US and Spain.

The results of the study are detailed in a paper published in the journal Nature Nanotechnology, the lead author of which is Klaas-Jan Tielrooij.

Led by ICFO professor Frank Koppens, the researchers are using graphene to directly measure the duration of a laser pulse less than 50fs in length. In doing so, they show that energy from incident photons can be transferred efficiently to charge carrier heat, with a constant spectral response between visible and infrared wavelengths of 500 and 1,500nm. This is consistent with efficient electron heating.

Koppens commented, “Graphene photodetectors show fascinating performance and properties, enabling a wide variety of applications. These range from multi-spectral imaging to ultra-fast communications, and such applications are now being actively developed within the Graphene Flagship programme.”

The Graphene Flagship is an international academic-industrial consortium, funded in part by the European Commission. One of Europe’s first Future and Emerging Technologies flagship initiatives, the Graphene Flagship focuses on the development of graphene and related two-dimensional materials. 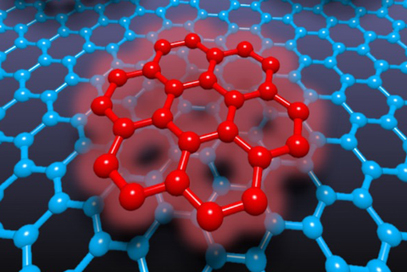 New insights into graphene and organic composites in electronics

In related work, chemists from Europe’s Graphene Flagship are investigating the potential for graphene-organic composite materials in electronics. The researchers show how organic semiconductors can be used to better process graphene, and to tune its properties for particular applications. Scalable processing and functionalisation of graphene is the subject of a new article by three Graphene Flagship scientists published in Journal of Materials Chemistry C

Chemists have long been interested in organic molecules for nanotechnology applications. Smaller organic molecules can enable the molecular assembly of carbon nanomaterials into highly ordered architectures such as nano-fibers, crystals and monolayers. The backbone of carbon atoms in polymers, on the other hand, can lead to more disordered large-scale assemblies, but the elongated and flexible shapes of polymers make for high solubility and an efficient transport of electric charge.

Graphene Flagship scientists Andrea Schlierf, Paolo Samorì and Vincenzo Palermo are considering a number of commercial polymers, the mechanical and electrical properties of which could be improved with the addition of graphene. The authors also consider graphene as a substrate for biomedical applications, and the use of organic semiconductors to open up an electronic band gap in graphene. The absence of a band gap in the pure form of this highly conductive material is a major issue hindering its exploitation in electronics.

The scientists say that “by depositing small organic molecules on a flat carbon surface such as graphene, one can modulate that surface through the externally undirected chemical process known as self-assembly. There are many classes of molecules that can be used for this purpose, ranging from simple alkanes to larger aromatic hydrocarbons. Self-assembly is in all cases driven by a complex interplay between inter-molecular and molecule-substrate interactions.”

Experimental results show that the nucleation, orientation and packing of organic semiconductors on graphene are quite different from those grown on conventional substrates such as silicon and graphite. Adding chemical side chains to the backbone of the organic molecules can also expose functionalities that work in synergy with or opposition to the core interaction between the adsorbed molecules and graphene, leading to more complex self-assembly pathways.

Another notable effect of graphene-organic interactions is fluorescence quenching in light-emitting dyes by charge or energy transfer. In this case, the interaction is associated with electromagnetic fields strongly enhanced as a result of the energy sink nature of graphene. It is this quality of graphene which makes it a promising material for photo-detection, nano-photonic and photovoltaic applications.