Another record-breaking year beckons for the US photovoltaics market as installers race to complete utility-scale projects before the end of 2016. 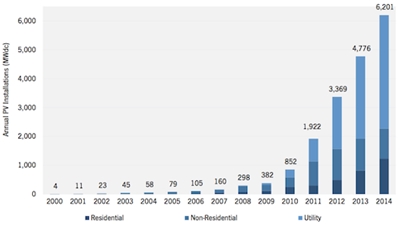 The US installed more than 8 GW of solar power last year, bringing total installed capacity to 20 GW – enough to provide electricity for some 4 million homes.

That is according to the annual US Solar Market Insight, published by analysts at Greentech Media (GTM) and the Solar Energy Industry Association (SEIA), the national trade association that represents the fast-growing industry.

Their market analysis, which agrees pretty well with the predictions made a year ago, suggests that a record 6.2 GW was installed in 2014, up 30 per cent on 2013 and led once again by utility-scale projects.

California retained its position as the largest state installer by a distance, with North Carolina moving up to second and Nevada third as Arizona and New Jersey slipped down the rankings.

The 2014 expansion meant that solar retained its spot as the second-largest source of additional electricity generating capacity in 2014, ranking behind only natural gas and accounting for 32 per cent of new grid power.

SEIA president Rhone Resch said in a cheerleading statement from the organization: “Today the US solar industry has more employees than tech giants Google, Apple, Facebook and Twitter combined.”

One significant change in the market from previous years looks to be the emergence of a much larger residential solar sector, in a country where utility-scale projects have tended to dominate the PV scene thanks to the 30 per cent solar Investment Tax Credit (ITC) that was instigated in 2006.

But with the ITC rate set to drop to only 10 per cent from the start of 2017, developers of utility projects are racing to complete their installations by the end of next year. And Resch highlighted the importance of that legislation, saying:

“Since the ITC was passed in 2006, more than 150,000 solar jobs have been created in America, and $66 billion has been invested in solar installations nationwide. We now have 20 GW of installed solar capacity – enough to power 4 million US homes.” 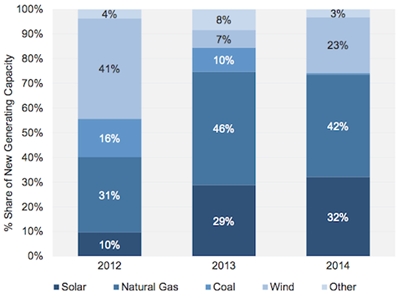 Module prices stable in 2014
The figures in the report confirm that annual solar installations in the US have increased by more than an order of magnitude over the past five years, with 18.3 GW of photovoltaics and 2.2 GW of concentrating solar power (which uses solar heat, rather than the direct conversion of light into electricity by solar cells) in place as of December 2014.

That rapid uptake has largely been attributable to the precipitous drop in PV module prices over the past few years, alongside the ITC and a relatively stable regulatory and political environment. However, more recently the cost of PV modules has stabilized, and it has been the falling costs of the other elements of PV systems that has driven overall price declines.

And while residential installations grew 51 per cent to just over 1.23 GW in 2014 – about half of which were in California – the non-residential rooftop market shrank by 6 per cent to 1.04 GW as key markets like New Jersey and Arizona dried up.

For 2015, there is certain to be further strong growth as utility-scale developers in particular complete projects ahead of the ITC rate reduction, and the Greentech Media analyst team is predicting a 31 per cent hike overall to around 8.1 GW.

Tax credit change: preparing for the worst
While utility installations are expected to account for nearly 60 per cent of the 2015 total, the residential sector will again be the fastest-growing. But it too will be impacted by changes to the tax regime at the start of 2017, whose effects look somewhat unpredictable.

“Businesses across the solar energy industry have begun preparing for the worst while hoping for the best,” writes the analyst team. “In general, solar businesses will try to bring as much capacity online as possible before the scheduled stepdown. Solar development will continue, but some markets will fare better than others.”

The change does looks very likely to precipitate a sharp decline in the US solar market in 2017, and although growth should resume subsequently, the new market that emerges is expected to look very different.

“For all market segments, the total addressable market will shrink post-2016, [and] some states will fall off the solar map entirely” the GTM/SEIA report predicts.

“The utility-scale market shows the most dramatic drop in 2017 not only because of the challenges posed by the lower ITC, but also because project developers have largely turned their attention to bringing their contracted projects online before the end of 2016 in order to capture the full 30 per cent credit.”

But that pull-in of the utility solar pipeline is expected to make the ITC cliff dramatic, and overall US installations are expected to drop by some 57 per cent in 2017.