Tax credit extension to push US PV installations to 100GW

Subsidy deal agreed in exchange for lifting of 40-year ban on exports of crude oil. 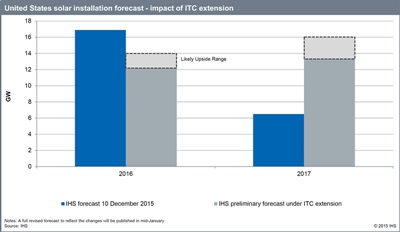 US politicians have agreed a five-year extension to the investment tax credit (ITC) for solar power. Due to expire in January 2017, it will now be preserved until January 2022, with the current subsidy rate of 30 per cent extended until January 2020.

The move, expected by one analyst to deliver an additional $40 billion in financial support, could see another 80 GW of solar power – the vast majority of which will be photovoltaic – added to the US electrical grid by the end of the decade. The cumulative total right now is just over 20 GW.

While cross-party support for the bills extending the ITC have come with a major environmental trade-off – lifting the 40-year ban on US exports of crude oil – supporters of solar power in the US have hailed the deal, which passed through Congress on its last day in session for 2015.

Rhone Resch, president and CEO of the Solar Energy Industries Association (SEIA), said on passage of the omnibus appropriations bill:

"This historic vote brings the solar industry to the forefront of the conversation about American energy. The ITC extension makes America and its solar industry the world’s pre-eminent producer of clean and affordable energy.”

Resch added: "A five-year extension of the ITC will lead to more than $130 billion in new, private sector investment in the US economy by 2020. Solar power in this nation will more than triple by 2020, hitting 100 GW. That’s enough to power 20 million homes and represents 3.5 per cent of US electricity generation.”

Resch’s figure of 100 GW comes from analysts at Greentech Media (GTM) Research, with which the SEIA partners closely on market research work.

MJ Shiao, GTM’s director of solar research, said: “There’s no way to overstate this - the extension of the solar ITC is the most important policy development for US solar in almost a decade.”

Despite the oil export trade-off, experts at the independent US think-tank the Council on Foreign Relations (CFR) reckon that the deal will be a net positive in terms of carbon dioxide emissions. In a blog post ahead of the votes in Congress CFR’s Varun Sivaram and Michael Levi wrote:

“Extension of the tax credits will do far more to reduce carbon dioxide emissions over the next five years than lifting the export ban will do to increase them. While this post offers no judgement of the budget deal as a whole, the deal, if passed, looks like a win for climate.”

Global market decline “reversed”
Elsewhere, IHS Technology’s senior solar analyst Josefin Berg observed: “Currently, the PV project pipeline in the US amounts to 58 GW, of which 20 GW have power purchase agreements in place. According to initial assessments, the five-year extension of the ITC could spur developers to continue growing the pipeline at the current rate of 15 GW per year.”

The unexpected ITC compromise, which came as a surprise to the PV industry when agreed by Democrats and Republicans last week, has also prompted IHS to revise upwards its predictions for the global solar market. The analyst firm reported:

“The result of the extension to the solar ITC is not just good news for the US solar market, but is a net positive for the global solar industry as a whole.”

Prior to news of the extension, IHS had forecast a 10 per cent decline in global installations that has since been reversed. It now believes that global solar installations will grow from around 59 GW this year to reach between 66 GW and 68 GW in 2016, before rising to between 70 GW and 73 GW in 2017.

The flip side of the ITC extension means that the price of solar PV may not fall as quickly as had been thought previously. The IHS analyst team had been anticipating a sharp correction in solar module and system prices, but now sees “much more moderate” decline for at least two years in what will be a far more stable environment overall.

According to GTM Research, US solar installations will still fall in 2017, because of the huge number of projects that had been accelerated for completion before the ITC was originally due to expire.

In 2016, US installations should reach around 14GW, before dropping to approximately 11GW in 2017 and then rising strongly each year to reach 20GW by the end of the decade.

If correct, that will amount to cumulative PV installations of about 98GW, enough to power nearly 20 million homes in the US.