Petroleum and climate scientists using a laser-based system to reveal what is happening in the Atlantic. 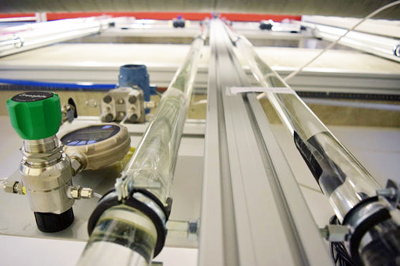 Atlantic current flows are simulated in a 4.5m test rig in Stavanger.

Aiming to simulate ocean currents in a laboratory, researchers at the Bjerknes Centre in Bergen and the University of Stavanger (UiS), both in Norway, have constructed a 4.5m high arrangement of plastic pipes, a laser, camera and measuring equipment.

Their objective is to better understand the Atlantic Ocean's innumerable water currents, which flow in different directions and at different depths, for purposes ranging from weather forecasting to oil prospecting. This requires highly complex modeling: besides the hard-to-model flow patterns, there is also the variability of salinity and temperature to consider.

The experiments are being conducted at the Multiphase Laboratory in UiS’s Department of Petroleum Engineering. In the laboratory, different fluids ("phases" of different salinity and temperature) can be directed through pipe loops and channels. Using the measuring equipment, based on high-speed cameras, lasers and ultrasound, the researchers are studying fluid flows in combination with gases or particles.

This experimental arrangement is normally used to study the flow of oil and gas in transport pipelines and to circulate out drill cuttings during the drilling of long, deep wells. However, Professor Rune Wiggo Time and Senior Engineer Herimonja A. Rabenjafimanantsoa see other applications. They intend to use similar flow systems to study the ocean currents of interest to the climate researchers at the Bjerknes Centre. 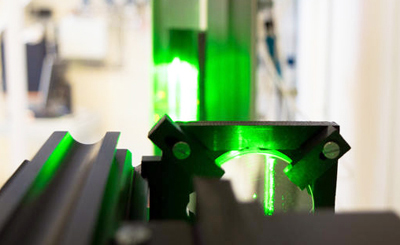 Flow behavior is measured by a bespoke laser, camera and ultrasound system.

In the laboratory, transparent plastic pipes are arranged to create a 4.5m high, closed loop. Inside the piping, a water current is generated through thermohaline circulation, without using pumps. Professor Time explained, “The loop and circulation pattern are similar to what we use in experiments with gas lift in wells to boost oil production." The researchers need to develop fast, extremely sensitive temperature gauges along with a computer-based control system in order to measure and regulate the temperature and salinity of the water at different points in the loop.

In recent years, the delicate balance between salinity and temperature, which determines flow behavior, has been disturbed by global warming, increased precipitation and accelerated ice melting. An increased input of freshwater is causing the surface water to become lighter, which in turn may cause less warm water to flow from the North Atlantic up along the Norwegian coast. Marine researchers are constantly discussing whether the thermohaline circulation, including the Gulf Stream, is slowing because of this process. 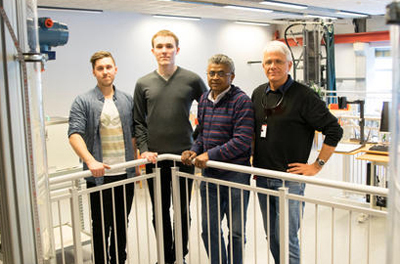 "The theoretical models describe ocean currents in a fairly coarse, but accurate way. Reality is more complicated; there are many layers of "rivers" in the ocean and there are many driving forces that are difficult to predict", says Time.

Some driving forces are meteorological, being linked to precipitation, wind, waves and evaporation. Others are known as "forces of inertia" and are partly linked to the time involved when the deep oceans globally transport and store their cold and heavy water currents.

"Our laboratory experiment follows the theory as closely as possible and will reveal whether unknown factors are discovered, ones that have not been incorporated in the basic mathematical model. An important advantage of our experiment is the fact that, by making minor modifications, the experiment can be made more comprehensive in order to capture even more subtle factors", says Time.

optics.org interviewed Professor Time about the nature and application of photonic systems to the ocean current research at Stavanger and Bergen.

optics.org: How are the lasers and cameras used in you ocean current simulator?

Prof. Time: The lasers and cameras are used to do PIV (Particle Imaging Velocimetry - velocity) and LDA (Laser Doppler) analysis of the flow in the pipes. The reason for that is that the simulated “ocean flow” speed in the pipes is so small that it cannot be measured with conventional flowmeters, including wide range e.g. ultrasonic based flowmeters.

For this specific application the lasers and cameras are used for their “allround use” capabilities, rather than for the high-speed need. The flow speeds are so small that conventional flow meter instrumentation is not applicable. While on the other hand the optical – laser based methods can be used for very low speeds even if intended originally for high speed flows. 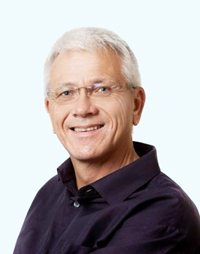 What types of laser and optical systems are deployed in the system?

We are using several laser and camera systems. The lasers range in application from pure flow visualization with small lasers (200mW CW diode green laser, 532 nm) up to high power lasers (NdYAG 2000 pulses per second at 10mW/pulse with nanosecond pulse length) for flow detail analysis. The cameras (5 in total) are high-speed cameras from Dantecdynamics (1 “HiSense” at 8fps, and 3 Nanosense MkIII 1Mpixel, 1000 -10000 fps) and one Weinberger MiniVis (1000 fps at 500x500 px). In addition we also use an LDA (Laser Doppler, 1D) with a red He-Ne laser (632 nm).

What results have you obtained so far; is this new data; does it correspond with real-world predictions?

The experimental setup is still under development and will be finalized during the next month. It will be used to “verify” mathematical models for the thermohaline circulation between the North Atlantic and the Arctic Ocean.

Who will benefit from using your model?

This project is financed by the Norwegian Research Council and will provide experimental data to verify very basic models for ocean flows. In that sense one may say that the benefit is for climate research, and in the extension of that for the society and planning for future climate regimes.

Do you have commercial partners in weather forecasting, oil prospecting or other marine research applications?

There are no commercial partners directly in this project. But as you can see on our the web site there are several other foreign universities participating. Indirectly we have laboratory support from oil companies, such as Statoil.

This article was amended on December 18 to add the interview with Professor Time.

Matthew Peach is a contributing editor to optcis.org.