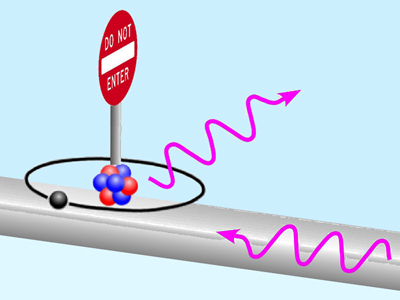 No entry; artist's impression of a one-way street for photons.

If light can flow in a medium from left to right, for example, then simultaneous propagation in the opposite direction is usually possible as well. A beam of light can normally be directed back to its point of origin, just by reflecting it with a mirror. Now, researchers at the Technical University of Vienna, Austria, (“TUW”) have developed a new device for that breaks this rule.

The device consists of a doped glass fiber that transmits light only in one direction, which functions in the same way as an electronic diode. The one-way-rule holds even if the pulse of light that passes through the fiber consists of only a few photons. The developers say that such a one-way-street for light can now be used in optical chips and they expect it could become important for optical signal processing.

The work has recently been published in an article in Physical Review X, which concludes, “Our results lay the foundations for a new class of nanophotonic devices based on chiral light-matter interaction, which would complement existing components for conventional integrated optical signal processing.”

Devices that allow light to pass in only one direction are known as optical isolators. The scientist leading the work, Prof Arno Rauschenbeutel, who works at the Vienna Center for Quantum Science and Technology at the Atominstitut at TUW, commented, “In principle, such components have been around for a long time. Most optical isolators, however, are based on the Faraday effect: A strong magnetic field is applied to a transparent material between two crossed polarization filters. The direction of the magnetic field then determines the direction in which light is allowed to pass.”

He added, “Unfortunately, for technical reasons, devices using the Faraday effect cannot be constructed at the nanoscale. But researchers are often seeking to build optical integrated circuits, similar to their electronic equivalents,” added Rauschenbeutel. “Other methods for breaking this symmetry only work at very high intensities. But in nanotechnology, an ultimate goal is to work with extremely faint light signals, which may even consist of individual photons.”

Rauschenbeutel’s team chose a completely different approach: alkali atoms were coupled to the light field of an ultrathin glass fiber. In a glass fiber, the light can propagate forwards or backwards. There is, however, another property of light which has to be taken into account: the direction of polarization, that is the direction of oscillation of the light wave.

The interaction of light and the glass fiber modifies the oscillation state of the light. “The polarization rotates, much like a helicopter’s rotor,” said Rauschenbeutel. The sense of rotation depends on whether the light travels forwards or backwards. In one case, the light wave oscillates clockwise and in the other, counterclockwise. The direction of propagation and the state of oscillation of the light wave are locked to each other.

If the alkali atoms are prepared in the correct quantum state and coupled to the light in the ultrathin glass fiber, it is possible to make them react differently to the two senses of light rotation. “The light in the forward direction is not affected by the atoms. However, light which travels backwards and consequently rotates the other way around, couples to the alkali atoms and is scattered out of the glass fiber,” said Rauschenbeutel. 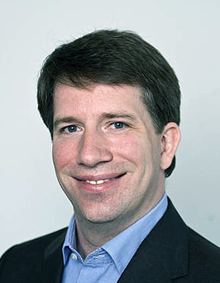 This effect has now been demonstrated in two different ways at TU Wien: In the first approach, about 30 atoms were placed along the glass fiber. Upon sending in light, a high transmission of almost 80% was measured for one propagation direction while it was ten times lower in the other direction. In the second approach, only a single rubidium atom was used. In the latter case, the light was temporarily stored in an optical microresonator, so that it could interact with the atom for a relatively long time. By this means, similar control over the transmission could be achieved.

Rauschenbeutel said, “When we only use one single atom, we have a much more subtle control over the process. One can prepare the atom in a quantum superposition of the two possible states, so that it blocks the light and lets it pass at the same time.” According to classical physics, this would be impossible, but quantum physics allows such combinations, which is why the Austrian reseachers are confidnt that the development could open the door to “new, exciting possibilities for optical processing of quantum information.”