But still awaiting world’s “highest power sources” - which should start test-firing from 2018. 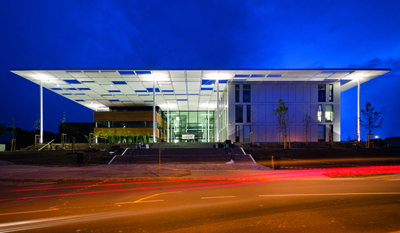 The ELI Beamlines international laser research center, which is currently being developed across eastern Europe, has just opened its facility near Prague, Czech Republic. The center, which will house some of the world’s most powerful lasers, with intensities 10 times higher than those currently achievable elsewhere, is funded by the European Commission. This building is the first of three such facilities being built within the EU.

When complete in 2018, The ELI facility will be shared across four sites. Three of them are now being implemented in the Czech Republic, Hungary and Romania, respectively, which together involve an investment exceeding €850 million, mainly from the European Regional Development Funds. Research operations, starting in 2018, will be unified under a European Research Infrastructure Consortium, known as ELI-ERIC.

The ELI-Beamlines building is sited in the town of Dolni Brezany, near Prague. Zdislava Lojdová, Communications Manager at ELI Beamlines, told optics.org, “Our new facility will mainly focus on the development of short-pulse secondary sources of radiation and accelerated particles, and their multidisciplinary applications in molecular, biomedical and material sciences, physics of dense plasmas, warm dense matter, and laboratory astrophysics.

"In addition, this center will uitilize its powerful, high-repetition-rate lasers, being installed over the next two years, for high-field physics experiments with focused intensities of about 10²³ W/cm2, such as for investigating exotic plasma physics." Lojdová added, “Now we have finished the first construction phase of the ELI Beamlines centre and we have just opened the administrative and multi-functional building. We also want to present our experimental halls, which are now being prepared for the installation of laser systems." 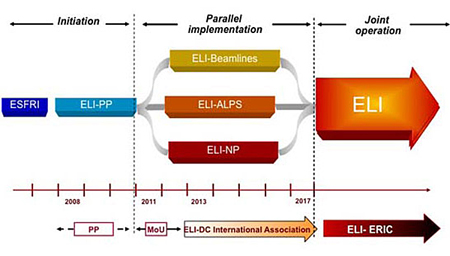 Laser research activities should start from 2018.

ELI Beamlines will have four laser systems. They are still in development in cooperation with other European and US-based laboratories. The lasers, provisionally called L1, L2, L3 and L4 (see below), will be installed from 2016 until the end of 2017. Research activities are planned for the beginning of 2018.

The UK-based designer of the building, Bogle Architects, said that the ELI Beamlines center would be formally opened on Monday 19th October in an event attended by representatives of the international scientific community, along with representatives of ESFRI, ELI Delivery Consortium and key partners from the Czech Government.

The architect firm explained its design: “Conceived as a research campus within a landscaped setting, ELI Beamlines [Prague] consists of four separate buildings, accommodating offices, laboratories, a multi-functional space with lecture theatre and a café and the principal element: a massive concrete box, comparable in size to a football pitch, housing the laser hall itself."

The ELI Beamlines facility will be a high-energy, high repetition-rate laser pillar of the overall ELI project. It will provide pulses from four laser systems. To meet the requirement for high repetition rates, three of these lasers will employ the state of the art technologies of diode-pumped solid state lasers (DPSSL) for driving broadband amplifiers. The fourth, multi-kilojoule laser will use a newly-developed flash lamp technology with an actively cooled gain medium.