European photonics industry back to growth in 2014 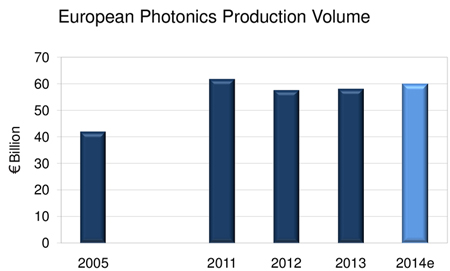 Total photonics industry production across Europe in 2014 reached a value of €60 billion. According to an analysis of preliminary 2014 data by Optech Consulting, based in Taegerwilen, Switzerland, that figure is up 3% from the €58 billion achieved in 2013.

Arnold Mayer, Optech Consulting’s director, commented, “the latest growth spurt was mainly due to an increase in the industrial segment. Also the production volume of the healthcare and life sciences segment increased moderately as well as the optical components and systems segment.”

Industrial photonics, with a share of 39% of the total photonics sector for 2014, accounted for the largest part of the European photonics production. This includes lasers and laser systems designed for materials processing and microlithography as well as components and systems for image processing, sensing, measurement and analysis. Other segments comprise health care and life science (14% of the total), energy and lighting (13%), optical information and communication (9%), and optical and opto-electronic components and systems (25%).

The €60 billion European photonics production volume for 2014 was the second largest total ever achieved (the largest volume of €62 billion was recorded for the year 2011). In 2012 and 2013, production volumes were depressed, mainly due to the meltdown of the European photovoltaic industry, which suffered from fierce competition from producers in Asia. 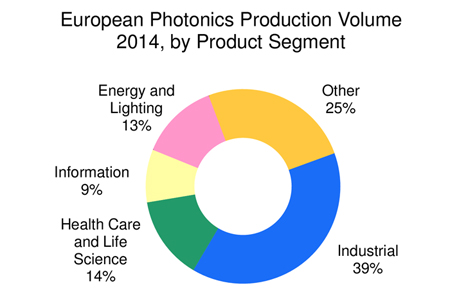 Photonics IT output struggled, while industrial, healthcare and components all improved.

Communications contraction continues Mayer commented that the production volume for photonics-based information technology, which has been a weak area of the European photonics industry for a long time, contracted further.

In contrast, the European photonics industry performed well in its areas of strength, which include the industrial segment, healthcare and life sciences, and optical components and systems.

By geography, Germany is the largest producer of photonic products in Europe, followed by the Netherlands, the UK, France, Italy, and Switzerland. Although its share decreased during the last years due to the contraction of its photovoltaic industry, Germany still accounts for more than 40% of the European photonics production.