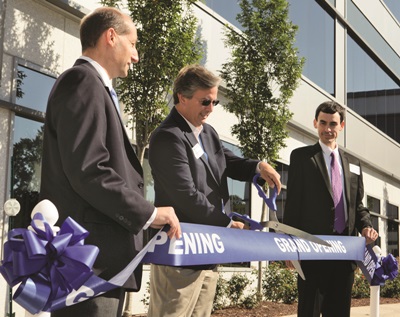 Cutting the ribbon in Princeton

The United Technologies subsidiary will benefit from more than 90,000 square feet of additional space, with the site housing a custom-built compound semiconductor wafer fabrication area, along with packaging, assembly, and test labs.

With more than 100 employees – 50 of whom are engineers – the site will focus on the research and development of new short-wave infrared (SWIR) detectors and cameras, for which demand is growing in both military and commercial sectors.

John Trezza, general manager of United Technologies’ “force protection” business, which includes Sensors Unlimited, said: “We created this state-of-the-art facility to attract the best and the brightest engineers in this field. The research and development we’re doing here has immediate real-world applications – from supporting military missions to detecting manufacturing defects.”

Founded in 1992 by Greg Olsen and Marshall Cohen, Sensors Unlimited was subsequently sold to the fiber-optic component maker Finisar in 2000 for $600 million. But following the optical communications “bust”, the company was sold back to its management team just two years later and for only $6 million.

Sensors Unlimited was then sold to aerospace firm Goodrich for $60 million in 2005 – the same year that Olsen spent some of his windfall becoming the third private citizen to orbit the Earth on board the International Space Station.

Olsen is now president of GHO Ventures, an angel investor company that is also based in Princeton.