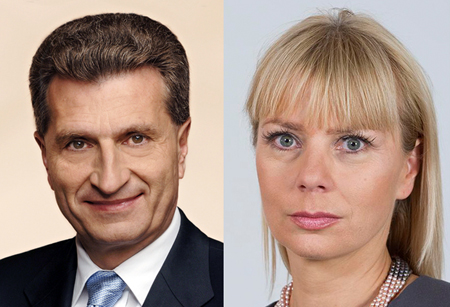 European Commission President-elect Jean-Claude Juncker has introduced his top team and the new structure of the next European Commission – including new commissioners with responsibility for photonics and industry including SMEs. The Juncker-led Commission will take office from November 2014 and is due to serve until 2019.

Announcing a string of senior personnel changes, Juncker said the new-look Commission will focus on “solving the big political challenges of Europe such as employment, more investment, the creation of a connected digital market, a credible foreign policy and energy security.”

Responsible for all photonics matters will be German Günther Oettinger, whose overall role is looking after the Digital Economy & Society, which also includes the ICT work programme. Juncker explained what he hopes Oettinger will achieve in a letter published on the EU website.

The new Internal Market, Industry, Entrepreneurship and SME portfolio will be headed by Pole Elžbieta Bieńkowska, who worked previously as Minister of Regional Development in Polish Prime Minister Donald Tusk's Cabinet from 2007 until November 2013, when she was appointed Deputy Prime Minister of Poland.

Juncker commented that her areas of responsibility “will be the engine house of the real economy”. His modifications to the directorate will mean that, for the first time, there will be specific consideration of small and medium-sized enterprises, “SMEs”, which he decribed as “the backbone of our economy.”

Further information about the prending Juncker Commission is available via the European Union website.