Lasers and nuclear power #2: the LaserSnake

Strict safety regulations mean decommissioning is yet to adopt laser cutting – but now UK firms are building the case for its use. 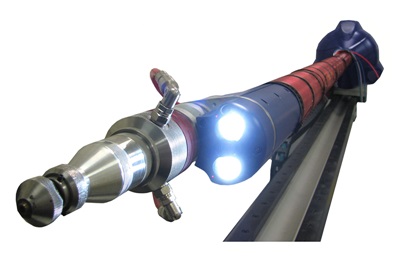 by Andy Extance
When Rob Buckingham and Paul Hilton met at a conference in 2010 they hatched an idea straight from the plot of a sci-fi movie: robotic snakes, armed with fiber-lasers, to wind through disused nuclear power stations.

But unlike the villains with devious schemes such an invention might evoke, the plan envisaged by the two British engineers sought to overcome an increasingly serious challenge. How can nuclear facilities that have reached the end of their working lives be made safe – especially the hard-to-access parts?

Two years after Buckingham and Hilton’s meeting, the companies’ first joint project showed that the ‘LaserSnake’ idea was feasible. Now, together with their partners on the £7.7 million LaserSnake2 follow-up project, they aim to demonstrate its use in an actual nuclear facility by 2016. But before they can do that, they must prove the LaserSnake can meet the strict standards of perhaps the most safety-conscious industry of all.

“LaserSnake2 is about addressing practical issues of using such equipment in a place like Sellafield, where safe operation is most important for their business,” explained OC Robotics’ Adam Mallion. “Lasers are used in hundreds of industries on a day-to-day basis – [but] they’re not widely used in nuclear because of safety concerns.”

First the project team must agree on exactly what form the demonstration will take with nuclear site operators. Then, LaserSnake must climb the ‘technical readiness level (TRL)’ scale to a point where it nears broader acceptance, and routine use by decommissioning engineers. “The challenge is getting to a stage of maturity where project managers can just ‘take it off the shelf’ as part of the standard toolkit,” Mallion said. 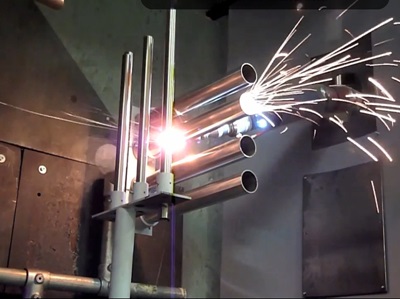 Cut out for tight spaces

Building a case for decommissioning
The project must therefore generate enough data to support the ‘safety case’ for LaserSnake, Mallion says. It is focused on two key questions. “When you’re cutting something, what happens to the laser beam after it has cut through something? The energy doesn’t dissipate instantly. What damage might it cause, where might it go? That’s been called the illumination problem.”

“The other is fume. That wouldn’t be a problem for other industries where it can be readily extracted, but the nuclear industry must make sure that nothing is released out [into] the atmosphere. It’s rather important that those filters don’t get clogged up.”

The team exploits 5 and 10 kW lasers for decommissioning applications. Hilton notes that because these lasers make narrow cuts they create less fume than other thermal cutting techniques. Furthermore, lasers are more versatile in tight spaces than mechanical methods, in which tools focus on particular materials and cutting orientations. They also provide enough positioning tolerance that there can be a large stand-off distance from the material being cut.

Nuclear decommissioning differs significantly from other industries’ laser cutting requirements, points out Hilton. “Gas-assisted laser cutting was in fact invented at TWI in 1967,” he said. “Since that time almost all the research in laser cutting has concentrated on maximizing cut quality. Maximum cut quality relies on a very small and carefully controlled stand-off distance between nozzle tip and material.”

But counterintuitively, when cutting components out of disused nuclear plants a ‘poor’ cut can be beneficial, as it keeps the maximum amount of waste material attached. “The more material that stays on the severed parts, the less remains on the floor to be subsequently disposed of,” Hilton explained. “TWI has demonstrated that if this high-quality cut criteria is removed [then] 200 mm-diameter tubes with 10 mm-thick walls can be cut from one side. We can also cut plate material up to 100 mm thick.” 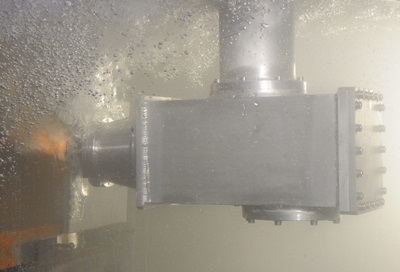 Safe to enter the fuel pond?

Nuclear reward
Making the cutting head for the end of the laser’s optical fiber sufficiently small and light to fit onto the snake-arm wasn’t a simple process, Hilton recalls. However, LaserSnake2 partner ULO Optics has been able to produce a lightweight decommissioning-specific laser cutting head, while Laser Optical Engineering has made special diffractive optics designed to optimize cutting.

Right now, the LaserSnake2 team is working to build larger and longer snake arm robots. “The places in which you’d want to deploy such a device are large rooms with big pieces of equipment in,” Mallion said. “To cut them up, you need to reach quite a long way.”

Also being tackled are trickier cuts, such as multi-skinned and even thicker components and metals attached to surfaces like concrete - where damage to the layer beneath must be avoided. The engineers have now demonstrated that materials can be cut underwater, which will be useful when reaching into ponds where nuclear fuel is stored, for example.

If LaserSnake2 is successful in meeting safety requirements and becoming a standard decommissioning tool, the rewards could be considerable. There are 19 nuclear reactors to be made safe in the UK alone, which the country’s National Audit Office estimates will run up an eye-watering £100 billion bill.

For the supply chain involved, the Nuclear Industry Association estimates that the overall program is worth around £1.5 billion per year. Yet those figures also reflect the size of the decommissioning challenge. With what TWI describes as ‘huge volumes’ of concrete and pipes to decontaminate, even a versatile tool like LaserSnake will have its work cut out.

The following video from TWI shows underwater laser cutting of stainless steel of thicknesses 12mm and 35mm. The work was conducted as part of the "LaserSnake2" collaborative project on decommissioning of nuclear power stations.