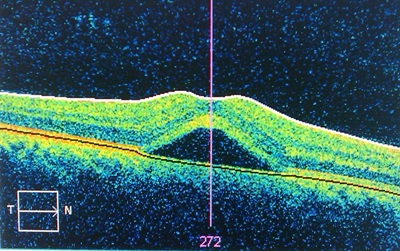 The Clermont-Ferrand firm’s “Vitra” system is designed to treat conditions called polypoidal choroidal vasculopathy (PCV) and central serous retinopathy (CSR) – both of which affect eyesight through damage to the retina.

Opportune moment
PCV is characterized by detachment of the pigmented epithelium and can often lead to a serious condition known as subretinal fibrosis. According to several studies, it is thought to be prevalent in 20-50 per cent of Asian patients with “presumed neovascular” age-related macular degeneration (AMD), and in 4-12 per cent of Caucasians.

However, Quantel says that it is currently believed that the true prevalence of the disease is under-reported, and expects additional demand for treatment in the future. “Studies have demonstrated excellent short-term efficacy of PDT for treating PCV,” it claims, citing a series of recent research papers.

Quantel Medical CEO Jean-Marc Gendre said of the European approval: “This comes at an opportune moment, as demand for PDT treatment technologies is expected to increase as the disease's true prevalence is realized.”

He is confident that the technology will provide ophthalmologists with a cost-effective treatment option, and commercialization is set to begin in both Europe and Asia. “This product development, supported by [Swiss pharmaceuticals giant] Novartis, will propose an updated solution for current and future PDT users,” he said.

The launch includes probes for the company’s “Supra” system and the Vitra PDT platform, both used in conjunction with photocoagulation lasers for the treatment of retinal diseases. “The extended range features two new, unique designs, including a flexible tip laser probe and a steerable laser probe,” announced the company.

“The new steerable probe allows unparalleled access to the retina with its steerable concept and 360 degrees rotatable handle,” it added. “The flexible curved probe's exclusive design features a flexible needle with a memory shape effect. Each probe in the line offers operator comfort of use with its optimized features.”

“The introduction of Quantel's new, single-use diagnostic and treatment lenses brings improved optical quality and safety, not previously available in the market,” claimed the firm. “The new, advanced design of the single-use lenses feature larger, flatter mirrors resulting in a wider, improved field of view. In addition to the optical improvement, the lenses provide a solution to many of the concerns that are often associated the risk of infection from improper disinfection of traditional, reusable lenses.”

“Quantel single use lenses provide a pristine view for diagnosis and treatment, and ideal laser transmission every time,” it added.