Q2 spending also up by 56% in Asia, but EMEA down, says sector report by Infonetics. 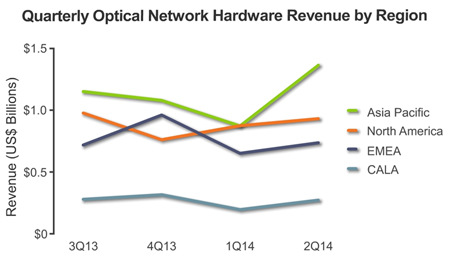 Market research firm Infonetics Research has published a vendor market share and preliminary analysis from its Optical Network Hardware report on sales in the second quarter of 2014 (2Q14). The full report is published on August 25.

Seasonality drove a 56% surge in optical hardware spending in Asia in the second quarter. In North America, internet content providers (ICPs), such as Google, generated a wave of optical spending at a handful of vendors including Adva, BTI, and Infinera, altogether accounting for an estimated $40 million surge in Q2, said Infonetics Research.

Andrew Schmitt, principal analyst for carrier transport networking , commented, “While the term tier-1 is traditionally associated with the incumbent operators of Europe and RBOCs (Regional Bell Operating Companies) in North America, it is now qualitatively clear that tier-1 spending growth is coming from the competitive dark fiber and internet exchange carriers. These carriers, as well as vertically-integrated ICPs, provide a growing portion of core internet connectivity and intra-datacenter capacity.”

Worldwide optical network hardware revenue, including SONET/SDH and WDM, totaled $3.3 billion in 2Q14, a sequential gain of 27% aided by strong seasonal performances from Huawei and ZTE.

In an interview with optics.org, Schmitt added, “There has been a lot of importance attached to the spending by tier-1 vendors (former US telcos and incumbent operators of Europe). It is difficult to provide a quantitative spending figure surrounding data centers – but it is clear that the growth in revenue from that particular part of the market is, by far, providing more growth than any other portion of the market.

"That was particularly evident in the last quarter because there was a big surge in spending specifically from ICPs. In addition to that, the data centers get a lot of attention, but there has also been growth in spending from IP carriers, such as Global Crossing, Level 3, Colt, XO and Zayo. Those companies are the backbone of the internet.

"But most of the internet content providers don’t own their own backbone – they have to buy capacity from those carriers, which are buying the equipment to turn on the capacity. Those are really the two areas of interesting growth and they happen to be exclusive from the traditional tier-1s. So while traditional tier 1s still account for a large portion of the spending, it’s definitely not growing faster than other parts of the market. And you could even make the case that they are not growing at all.”

Asia up, EMEA down

Overall, global optical spending is roughly flat year-over-year (2Q14 from 2Q13) as strength in Asia Pacific offset weakening spending trends in EMEA. Worldwide WDM equipment revenue in 2Q14 is up 6% year-over-year. The first half of 2014 brought another huge flood of 100G WDM shipments from the likes of Alcatel-Lucent, Ciena, Cisco, Huawei, and Infinera. Ciena’s and Infinera’s North American optical revenue grew rapidly on a year-over-year basis in 2Q14, while Fujitsu’s and Alcatel-Lucent’s decreased.