Babak Parviz, one of the creators of Google Glass, looks forward to "smart" devices becoming unobtrusive. 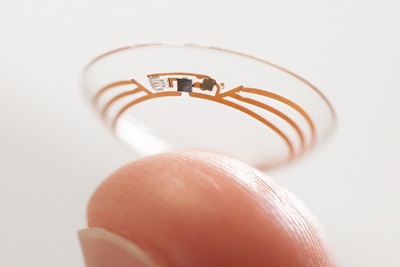 by Ford Burkhart in San Diego
One of the creators of Google Glass thinks that the next generation of wearable computers may change the way humans live and interact as much as anything in the last 50 years.

Babak Parviz, now a vice president at Amazon, told a plenary audience at SPIE’s Optics and Photonics 2014 conference in San Diego that the era of wearable technologies may see computing power suddenly become more mobile and versatile than many would have predicted.

Stressing that his remarks had no particular connection with Amazon, Parviz said that the smart phone was merely the leading edge of a revolutionary and more personalized form of global communication.

The big question, he said, is: “What could potentially come after this?” The answer: Something even more compact, miniature and personal.

One potential answer has been Google Glass, a product that rests comfortably on the face, yet in Parviz’ words is “strange, different from what we’ve seen before”.

However, such displays are not really such a new idea. Exactly 100 years ago, soldiers fighting in the First World War were wearing helmets with an optical component.

Of course, they were nothing like the latest wearable tech, which today feature everything from transparent displays to voice control.

Unobtrusive goal
In the future, a user could immediately access highly connected computing power by simply glancing at a display. Such a system would also allow access to a world seen through the eyes of the wearer.

New devices, Parviz said, could shorten the time needed to access information from the internet down to just a few milliseconds, even bypassing the need for a browser. “You would just ask,” he said.

“Google Glass is a solid first step,” said the Amazon executive, who also led a project to develop “smart” contact lenses before leaving Google to join the online retailer.

“Eventually the technology should just disappear… it should seamlessly integrate into our daily lives. It has to be unobtrusive, and just let you live your life.”

On the subject of the smart contact lenses, Parviz asked rhetorically: “Is this science fiction? I doubt it.”

However, he also pointed out that this area of research was still very much in its early stages - although Google announced a licensing deal with eye care company Alcon (part of the Swiss pharmaceuticals giant Novartis) just a month ago.

• In the same plenary session, Robert Pappalardo called for a dedicated mission to explore the distant world of Europa. The smallest of Jupiter's Galileian moons, Europa is thought by some to have a large aquatic ocean hidden beneath its surface - and therefore the potential to harbor life.

Pappalardo, a senior research scientist at Caltech's Jet Propulsion Laboratory in Pasadena, California, said that the knowledge gained from such a mission "had the potential to change [our understanding of] our place in the universe".

"We are reasonably sure there is an ocean down there, under the cold ice shell," he said. "In our lifetimes, we could be exploring Europa, and learning whether it could have generated living things."