Progress on UV conversion at IPG 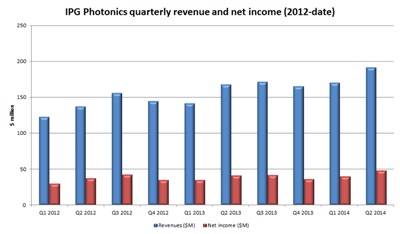 IPG Photonics has posted another solid increase in revenues and net income in its latest quarter, as strong sales of high-power fiber lasers helped to raise profit margins.

The company, which is headquartered in Massachusetts and is currently expanding its operations there and in Russia, reported record sales of $192.2 million for the quarter that ended June 30.

That represented a 14 per cent rise on the same period in 2013, as well as a 13 per cent jump from the opening quarter of this year. Pre-tax income rose more sharply, and was up 16 per cent on last year to $69 million.

"We continue to see strong growth in high-power fiber laser sales, which increased by 22 per cent," Gapontsev added. "We are also seeing fast-growing demand for our new generation of picosecond high peak power fiber lasers and multi-hundred watt average power pulsed lasers and where we have technological advantages for new applications such as deep engraving, ablation and cleaning."

UV progress
In a conference call with investors, Gapontsev also highlighted IPG’s increased research and development spending, and recent technological developments with pulsed ultraviolet sources in particular. Those lasers are now said to have reached an average power of 200 W at 355 nm, and a peak power in excess of 100 kW.

A key challenge with the high-power UV sources is the ability to grow frequency conversion crystals with the kind of quality demanded by production systems, and this is something that IPG has been working on internally. Gapontsev indicated that good results had been seen with frequency-doubling crystals for green sources, but that frequency-tripling to reach UV wavelengths had proved much more difficult.

The development of UV and green lasers is part of IPG’s wider strategic plan to introduce fiber sources across a broad swathe of the spectrum, all the way to the mid-infrared region. The new ultrafast lasers are also part of that plan, and a variety of new products are set to be launched in the coming months.

3D printing
Turning to the high-profile emergence of 3D printing, and laser additive manufacturing specifically, IPG’s CFO Tim Mammen told investors that sales for this growing application still only accounted for around 2.5 per cent of the company’s total revenues – despite having doubled in absolute terms over the past year.

He estimates that a laser additive manufacturing market of 1000 systems in the future would equate to laser sales worth $70-80 million, but also said that the current market was much smaller, amounting to fewer than 200 such systems. That is because the vast majority of 3D printing applications currently relate to polymer materials, which are typically made with much simpler extrusion technology and not lasers.

But if 3D printing of metal parts in volume really takes hold, the market could become far larger than 1000 systems, and Gapontsev suggested that IPG would even consider selling its own systems if that was to happen.

At the moment, some customers are investing in multi-kilowatt lasers to make large parts or increase throughput, while others prefer to use a combination of multiple lower-power sources (typically 300-500 W) when part quality or complexity is more of a priority.

Cutting and welding headroom
In the meantime, cutting and welding applications remain the key drivers of IPG’s business and of demand for its high-power lasers, which accounted for 54 per cent of revenues in the latest quarter.

Mammen estimates that fiber sources currently have a 35-40 per cent share of the market in laser cutting applications, suggesting plenty of headroom for further growth – especially in Japan, where carbon dioxide sources remain popular because of a loyalty to local laser suppliers.

In welding applications, the market penetration is thought to be a little higher at around 50 per cent, but there is also the potential for growing the market here by displacing more traditional arc and spot welding technologies.

No expected impact from Russia sanctions
With a book-to-bill ratio well in excess of unity in the latest quarter, IPG is confident of a strong second half this year, and does not expect impending sanctions on Russian companies in the aftermath of the MH17 incident to have any material effect on its operations.

The supply of optical components made in Russia for IPG’s lasers are not covered by those sanctions, while Mammen said that Russia accounted for less than 5 per cent of the firm’s sales.

And although the company has some concerns that the sanctions may have a more general negative impact on the Russian economy, for example on liquidity and spending, Gapontsev also said that he saw no sign of any counter-sanctions from Moscow that would have a negative impact on IPG’s business.

All in all, IPG’s executives are expecting revenues to grow to between $190 million and $205 million in the current quarter, and IPG's stock shot up 10 per cent in value shortly after the earnings announcement.