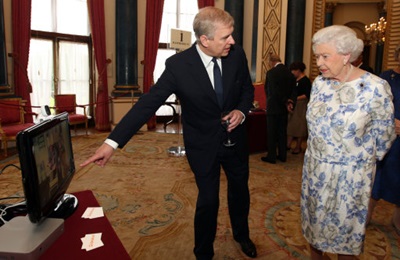 The Duke of York has agreed to become patron of the International Year of Light (IYL2015) in the UK, and will help to raise awareness of the power, ubiquity and economic impact of photonics during next year’s celebrations.

The Duke, well known for his support of entrepreneurship and science, technology and engineering education, is set to front the IYL2015 opening ceremony in the UK. He will also host a competition for young people and visit photonics companies throughout the year.

In the UK, the IYL2015 efforts are being co-ordinated by the Institute of Physics (IOP). Welcoming The Duke of York as UK patron, IOP’s president Frances Saunders said:

“On behalf of the national committee, I am delighted that The Duke of York has agreed to be our patron. We could not hope for a better or more supportive friend. He has already shown his support for science in the UK and in particular an interest in the photonics industry, a real UK success story worth an annual £10.5 billion to the economy and with a growing, high-tech export market, and I know that he is equally enthusiastic about the wider aspirations for [IYL2015].”

"[IYL2015] will be pivotal in raising awareness of the impact of photonics and in encouraging young people to pursue the many and varied careers available in light based technologies. We hope the Duke of York’s involvement will inspire more young people to get involved with photonics and encourage more light-based technical innovation in the UK."

Economic impact
According to the PLG’s figures, the UK photonics industry employs more than 70,000 people at 1500 firms, as well as adding £10.5 billion to the economy – predominantly in exports.

But the group also stresses the need to raise greater awareness of how and where light is and can be used, and inspire more young people to take up science and technology, to ensure that the sector has sufficient supply of engineers, innovators and entrepreneurs in the future.

“The PLG welcomes [IYL2015], significantly boosted by the Duke of York’s involvement, to help encourage UK photonics to fulfil its full potential, continue to grow and lead further innovation,” it said.

Ratified by the United Nations in December 2013, IYL2015 is intended to raise awareness of how optical technologies can provide solutions to worldwide challenges in energy, education, agriculture, communications and health. The year also represents the anniversary of a number of key discoveries in the science of light, starting with what is regarded as the first ever work on optics by Islamic scholar Ibn Al-Haytham in 1015.

Other anniversaries include the outstanding achievements of two UK scientists: the electromagnetic theory of light propagation proposed by James Clerk Maxwell in 1865, and Charles Kao’s demonstration in 1965 of the transmission of light in fibers – now fundamental to global communications.

As well as enthusing young people about science in general, the goals of IYL2015 include support for women in scientific careers, and an accelerated distribution of solar lighting in rural communities in Africa through the “Study After Sunset” program.

IYL2015 is set to kick off in style next January with an official opening ceremony at the Paris headquarters of the United Nations Educational, Scientific and Cultural Organization (UNESCO). In April, lighting giant Philips signed up as the first IYL2015 sponsor.