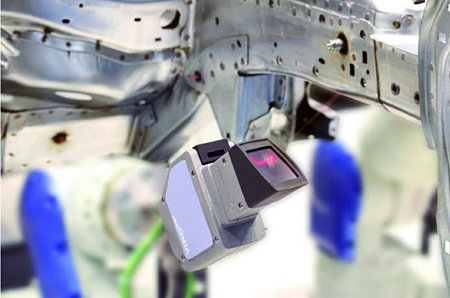 The European machine vision (MV) industry is in “an excellent condition”, according to the German VDMA’s latest market survey. published earlier in July. It states that the MV sector’s turnover grew more strongly than initially expected – by almost 10% in 2013 and for 2014 the VDMA expects a further growth spurt of 12%.

”This is great news for our industry," said Donato Montanari, Board Member of VDMA Machine Vision and general manager of the MV business unit at Datalogic Automation at last week’s VISION press conference in Reutlingen, Germany.

The survey reports that European suppliers of MV technology have benefitted from strong demand in both manufacturing and the non-industrial application fields. In keeping with the general trend of recent years, 2013 saw the biggest growth – an increase of 19% – in the non-industrial area. Intelligent traffic systems and medical technology gave the biggest impetus for growth.

Montanari added, “The versatility of MV as a problem solver is a strong driver for growth. New applications are constantly developed, boosting demand. The lion’s share of our business, however, is still generated by the manufacturing sector, which grew by 6% in 2013.”

The VDMA believes that there is “a renaissance of industrial production in many European countries and the USA”, which will create stable demand for MV technology in the coming years. In 2013, the automotive industry was the biggest customer for machine vision with a 22% share of total turnover. This was followed by the electronics and the electrical industry including semiconductors (14%) and the food and beverage industry (6%).

In 2103, the European MV companies in the survey recorded their strongest growth in Asia: an increase of 28% over 2012. China accounted for approximately 9% of business. Montanari said, “More than a quarter of European MV sales are in Asia and we still expect this to grow further.” 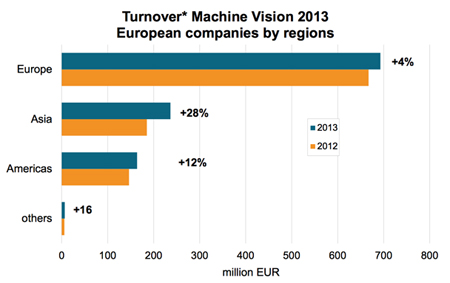 While domestic demand for the European MV providers grew by a modest 4% in 2013, North America bought almost 13% more vision technology from Europe. The recovery of Europe is noticeable but happening at a slower pace than in the US, where substantial investments in the modernization of production facilities are increasing competitiveness. The aim is “re-shoring” manufacturing that had been previously moved to lower wage regions.

Manufacturers of compact systems, such as intelligent cameras and vision sensors, expanded sales by 20%, to just over €100 million. By contrast, the MV components business grew by only 6%. The largest product category, cameras, increased sales by 8%, while the fastest growing components category was frame-grabbers. European grabber makers saw their business rise by almost 9%, mainly for high-speed and high-end applications.

The German MV industry increased its turnover by 8% in 2013 totalling €1.6 billion, said the VDMA. Growth impetus came mostly from exports: while domestic turnover stagnated, exports rose by 15% and export share edged up from 55% to an all-time high of 58%. This growth led to an increase of employment in this sector by 9%. Montanari commented, “Due to a favorable order intake in the first half of 2014, we expect German MV suppliers to grow sales volume by 10% this year, and turnover to exceed €1.8 billion.”

Another new vision sector market analysis, conducted by IHS Technology, forecasts that shipments of embedded vision devices in the automotive, industrial automation, physical security and business intelligence markets will exceed 14 million units in 2018, up from almost four million units in 2014. Embedded vision systems utilize a combination of embedded systems and computer vision, which allows devices to use video inputs to better capture and understand their environment, and apply logic and decision making processes to video signals.

The IHS technology report comments, “The maturity of embedded vision algorithms varies by application market. For instance, while embedded vision technology has been active for some time in physical security and industrial automation markets, the consumer sector represents more of an emerging opportunity.”

However, despite the synergies in algorithm requirements across diverse application markets, there are still “very few vendors active across multiple applications”, the analyst adds. In some markets, like automotive, the long sales cycles and high qualifying requirements have limited new competition. In others, such as physical security, the fragmented equipment market means that algorithms need to be optimized for a large number of products, which can act as a barrier to new entrants.

”While the software and hardware vendors in embedded vision are not expected to move into every application market soon, developments in the automotive space, in particular, should help spur more accurate and reliable algorithms across the embedded vision industry,” says the analyst. “This trend, combined with increased awareness in the consumer market for augmented reality and gesture recognition, means that demand for embedded vision devices will grow rapidly in the decade ahead.”