LED manufacturer is about to shut down one of its facilities and has cut research spending. 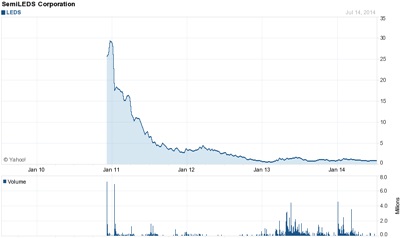 The Nasdaq-listed but Taiwan-headquartered LED maker SemiLEDs has posted another hefty quarterly loss, as it battles to conserve cash by cutting back its operations.

For the three months that ended May 31, the company posted a net loss of $6.4 million on sales of only $4.6 million. As a result, SemiLEDs now lists $16.1 million of cash and equivalent assets on its balance sheet – down from $21.5 million at the end of February.

Some of that cash outflow should be stemmed by the imminent shut-down of the company’s Sinwu manufacturing facility in Tawian – although the relocation of some manufacturing equipment to SemiLEDs’ remaining site in Chu-Nan has interrupted production. “The relocation…could impact our fourth quarter manufacturing capability and revenue,” announced the firm.

Relocation
Long-time CEO Trung Doan, who has been at the firm since its initial development of unusual chip designs based on copper-alloy substrates, told an investor conference call that a new strategic focus on higher-margin ultraviolet emitters was starting to improve matters, but the near-term thinking remains dominated by cost cuts.

“To conserve cash, in the last two quarters we initiated a number of actions including the consolidation of facilities, headcount reductions and exploring opportunities to sell excess equipment,” Doan said.

“Our Sinwu Facility will be shut down after July 15, 2014 and we are currently in the process of starting up the relocated equipment at the expanded area of our Chu-Nan Facility.”

That relocation and start-up should be largely finished by the end of the August, after which SemiLEDs should start to see some benefits from the smaller operational footprint.

“While we are encouraged by the progress we have made in reorienting our business to the more profitable segments of the LED market, including UV and components, we remain focused on operational cost improvements in order to return our operations to cash flow positive and achieve profitability,” concluded Doan.

R&D spending cut
Evidence of that strategic change showed up in sales figures revealing a 44 per cent sequential decline in sales of LED chips, which now represent only a quarter of the company’s revenues.

Meanwhile sales of LED components grew by 47 per cent sequentially, and represented around 40 per cent of total revenues in the quarter. Sales of lighting products also grew strongly and accounted for just under a quarter of total revenues.

One area where SemiLEDs has already managed to cut its spending is in research and development. In the latest quarter that amounted to $1 million, down one-fifth on the immediately preceding quarter’s figure.

SemiLEDs gave no indication of its likely results in the current quarter, which will do little to aid the company’s ailing stock price. Since its $90 million Nasdaq initial public offering in December 2010, after which SemiLEDs briefly traded at $29.50, shareholders have seen their investment lose more than 95 per cent of its value. At the close of trading on July 14, the stock was worth just over $1.