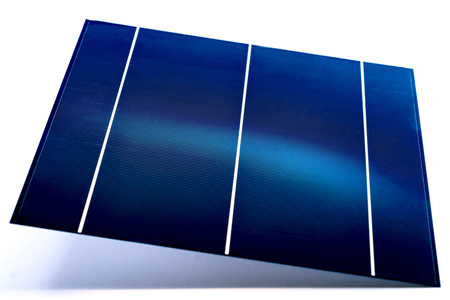 21.5% is the highest efficiency achieved for this type of solar cell.

Nano-electronics research center imec, has announced its development of a crystalline silicon solar cell with a conversion efficiency of 21.5 per cent, which it says is “the highest efficiency achieved for this type of solar cell on an industrial large area wafer”.

The cell’s design and composition is an n-type PERT (Passivated Emitter, Rear Totally diffused) crystalline silicon solar cell fabricated on a large area wafer, measuring 156 x 156mm. It has been calibrated at the Fraunhofer ISE Callab in Freiburg, Germany.

imec believs that this achievement will accelerate the adoption of n-type PERT solar cells in the photvoltaic industry as it clearly shows the potential for improved conversion efficiencies for next-generation standard two side contacted crystalline silicon solar cells. Additionally imec researchers showed recently that n-type PERT solar cells, having a rear emitter, are not affected by the typical reliability risks observe in a front Ni/Cu plated metallization.

The results have been achieved in the framework of the imec’s industrial affiliation program on advanced silicon solar cells, for developing high performance and low cost Si PV-technologies. In this program, imec works closely together with industrial and academic partners along the solar cell value chain. The partners are supporting imec’s developments and obtaining early access to new technology solutions thus accelerating their own product development.

The cell achieving the 21.5 per cent conversion efficiency had an open circuit voltage of 677mV, a short circuit current of 39.1 mA/cm2, an 81.3% fill factor, and it features a rear blanket p+ emitter obtained by boron diffusion. Reliable front metal contacts on an n+ front-surface-field are formed by means of Ni/Cu/Ag plating (a 3 bus bars grid design) using an industrial plating tool from Meco, while the rear local contacts to the p+ emitter were obtained by laser ablation of the rear passivation stack and subsequent physical-vapor-deposition of aluminum.

The rear passivation stack includes a thin (<10 nm) Atomic-Layer-Deposited (ALD) Al2O3 layer, deposited with the spatial ALD technique InPassion Lab from SoLayTec. The adoption of ALD Al2O3 based-passivation for the p+ emitter resulted in an average improvement in cell efficiency of about 0.3% absolute with respect to passivation by wet oxidation.