One year since PLG's resurrection, CEO John Lincoln tells optics.org about its achievements and future plans.

The UK’s Photonics Leadership Group (PLG) has just published a set of figures, which, it says, shows the growing significance of UK photonics to the nation’s manufacturing sector and the wider European industry. John Lincoln, chief executive of the organization, told optics.org, about some of the group’s achievement highlights over the past 12 months.

“We have recently published a set of figures on the size of the UK photonics industry, benchmarked against other industry sectors, using various government statistics (Office for National Statistics, ONS), in terms of business turnover and employment provided.

"Most noticeably, we employ a similar number of people to the UK’s pharmaceutical industry; we are slightly smaller in terms of financial delivery but of the same order of magnitude. The UK also constitutes about 20% of the whole European photonics sector." 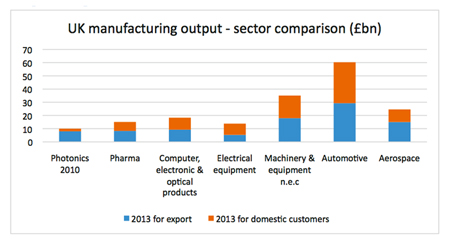 As an advice source for UK industry, the Department for Business, Innovation and Skills BIS) and agencies such as the Knowledge Transfer Networks, the PLG says it has established clear links between photonics and the so-called "Eight Great Technologies", as defined by the UK government.

Over the past few years, other UK laser-related groups, notably the Association of Industrial Laser Users (AILU), have warned that UK manufacturing industry was not showing much enthusiasm for making substantial investment into lasers compared with more substantial investors such as Germany, the US and in the Far East. So what has the PLG been doing to encourage take-up? 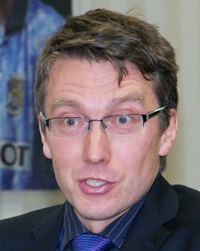 Lincoln commented, "We have been actively liaising with the Manufacturing Advisory Service, which has a national remit to assist manufacturing companies with their processes and technology to make them aware of laser-based processing. Considering the photonics sector supply-chain, we have also supported initiatives by AILU and of the Centre for Innovative Manufacturing in Laser-Based Industrial Processes, Duncan Hand’s group at Heriot-Watt University.”

PLG membership and activities
Since the resurrection of the volunteer-led PLG, there has been growing interest in its activities from companies and academics alike, as detailed on its website. Notable industrial members include M Squared Lasers, Xyratec, Seagate, Oclaro and BAE Systems.

Lincoln said, “Over the past year, we have been pleasantly overwhelmed by strong support from across the UK. There is no subscription membership fee although we do welcome contributions from interested parties. There is a balance somewhat in favor of industry and our meetings are capped at about 30 or so people, so that these events are effective forums. Our problem is who to turn away rather than who to invite.”

Considering that the PLG is a voluntary organization with no financial activities, is it likely to become a victim of its own success if demand for consultancy continues to grow? Lincoln thinks not: “We are a guiding body not a delivery body. We work with various delivery agencies, such as the KTN, TSB and BIS, to nudge the direction of potential support in ways that industry feels will have the most impact.

"As with Photonics 21, the PLG has found it beneficial to be voluntarily supported to maintain our independence and to provide unbiased commentary. But we are also grateful to the likes of the KTN to provide some back office support in the same way that Germany’s VDI provides some support to Photonics 21."

Future opportunities
So which UK industry sectors are showing the most immediate promise for greater adoption of photonics technologies?

Lincoln said that the strongest current opportunities for laser-based materials processing are in cutting, marking and welding.

"In the longer term, 3D manufacturing also offers great promise for laser-based manufacturing of high-value parts. There are also great opportunities for photonics systems in metrology.” 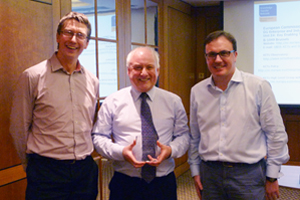 Besides its day-to-day activities, the PLG itself is hoping to establish what it calls a champion for the photonics industry and is “actively pursuing a number of objectives to achieve that,” said Lincoln.

The PLG recently recognized the longstanding support for the industry and achievements of Alastair Wilson, who retired as director of photonics at the KTN at the end of 2013. Wilson held this role through various iterations of the KTNs, previously ran the Scottish Optoelectronics Association, and has been instrumental in the development of photonics clusters across Europe.