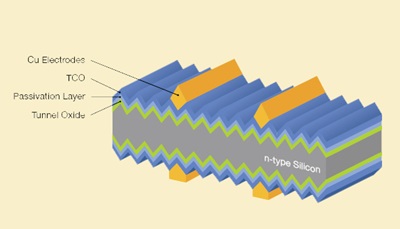 In a deal that will be worth $350 million if cost and production targets are met, SolarCity’s aim is to become the most vertically integrated photovoltaics company in the world, and to push PV technology to the point where it is genuinely competitive with conventional energy sources.

In a conference call with investors, SolarCity chairman Musk admitted that the move might have come as a surprise – the solar sector in the US is littered with failed manufacturing ventures – but explained:

“If we don’t do this, we felt there was a risk of not being able to have the solar panels that we need to expand the [SolarCity] business in the long term.”

“We expect to need tens of gigawatts [of PV module capacity] per year, but capacity in the world is simply not enough to do that.”

The key problem identified by Musk and SolarCity founders Lyndon and Peter Rive is that the volume module capacity that is available currently is dominated by relatively low-efficiency modules that will never be able to provide competitively priced energy without subsidies.

If SolarCity can achieve that aim with Silevo’s “Triex” cells, which are based around a tunnel-junction semiconductor design, it could have a dramatic impact on the PV business and the wider energy sector.

Tunnel junction technology
Having evaluated more than 20 potential cell technology companies to acquire on the basis of their conversion efficiencies and ability to scale up to volume production, SolarCity settled on the Fremont, California, firm Silevo, whose cells have demonstrated 23 per cent efficiency in the laboratory.

Founded in 2007 by former Applied Materials executives Zheng Xu and Jianming Fu, the company now has a manufacturing site in Hangzhou, China, with a nameplate capacity of 32 MW. While small by the industry’s recent standards, that capacity was enough to convince SolarCity of the start-up company’s ability to scale production.

Key to the high-efficiency performance is a design inspired by expertise from the silicon semiconductor industry – Silevo’s VP of product engineering was previously a senior engineer at Intel – and related to the metal-insulated-semiconductor (MIS) cells initially developed in the 1970s.

PV researcher Martin Green from the University of New South Wales in Australia, widely regarded as one of the leading scientists in the field, reported a 17.6 per cent-efficient MIS cell as long ago as 1979, illustrating the potential of the technology.

Silevo’s “Triex” cells couple n-type crystalline substrates with tunneling oxide layer structures that are widely used in the semiconductor industry and traditional thin-film passivation layers, generating a device with a high conversion efficiency – but which is based around standard manufacturing processes.

Back in 2012, Silevo said that it was able to produce 21 per cent efficiency cells in volume, and currently offers its “R-Series” modules with a claimed efficiency of “up to” 18.4 per cent.

Now, the company says that it has demonstrated 23 per cent efficiency with its laboratory cells, and is aiming to reach 24 per cent in production by the time it has built out its initial volume capacity – expected in 2016.

Buffalo stance
Ahead of the SolarCity deal, Silevo had already been in discussions with the State of New York about constructing a new factory in Buffalo – the same location where advanced LED manufacturer Soraa is also expanding its production footprint and Japan's Solar Frontier is potentially building a new thin-film solar fab.

With the US authorities recently closing a loophole in the trade dispute with Chinese PV module makers, manufacturing PV cells and modules domestically has become a much more attractive proposition for US companies.

Silevo’s manufacturing process is also said to be highly automated, meaning that the low cost of Chinese labor in comparison with the US will be less of a factor, while Musk pointed out that the Buffalo location will enable it to take advantage of the cheap and renewable hydroelectric power available locally from Niagara Falls.

According to reports that circulated late last year, the state of New York had been willing to aid Silevo’s planned 200 MW cell facility in Buffalo with $225 million of support shared between it and Soraa.

Grand plans
But it now seems that SolarCity’s ambitions for scaling up go way beyond that kind of capacity, with Musk suggesting that the site could become the world’s largest cell production facility. He told investors that the initial plan was to build out a gigawatt-scale factory, but that if SolarCity was to meet its targets for PV installations it would need factories capable of producing 10 GW or more each year.

If it can combine efficiency with that kind of volume to reach an unsubsidized cost of energy that is competitive with that from conventional sources, SolarCity sees an essentially infinite market for its technology over the next few decades, Musk told investors.

Markets appeared happy with the scale of ambition, with SolarCity’s stock rising in value by more than 20 per cent after the Silevo deal was announced. Although the company has gained huge attention through Musk’s affiliation and fast-growing deployments of residential solar power, it posted widening losses in its latest quarter. 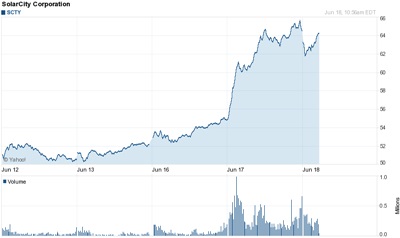 During the three months that ended March 31, SolarCity deployed 82 MW of peak solar power and booked a record 136 MW. But despite more than doubling revenues on the same period last year to $63.5 million, its operating losses grew even faster, to $67 million, as the company hired large numbers of sales staff.

Last year the firm raised close to $400 million in stock and notes offerings, and its balance sheet still shows more than $500 million in cash despite the recent losses.