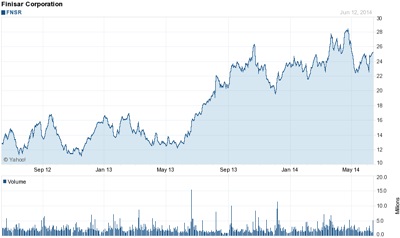 Shares in the Californian photonic component manufacturer Finisar slumped in value by one-fifth after the company posted its latest financial quarter – and despite a sharp increase in both sales and profit from a year ago.

Datacom demand
For the closing quarter of its fiscal year 2014, Finisar reported sales of $306 million – up 26 per cent on the same period of fiscal 2013. As a result, Finisar’s annual revenues tipped the billion-dollar mark, coming in at $1.16 billion – up from $934 million last year.

That improvement translated to the bottom line too, with net income of $28.4 million for the latest quarter, up from just $3.9 million a year ago. For the full year, Finisar turned last year’s $5.5 million net loss into net income of $111.4 million.

Announcing that both the latest quarterly and full-year sales represented all-time records for the company, executive chairman Jerry Rawls also pointed out that Finisar had now posted seven consecutive quarters of revenue growth.

CEO Eitan Gertel added: "Demand for transceivers operating at 10 Gb/s and faster continued to be strong during the quarter. Demand was also strong for our transceivers for LTE wireless applications." Finisar’s figures showed that sales of datacom products rose particularly sharply during the quarter, up $12.6 million sequentially.

But despite those positive numbers and expectations of another increase in revenues in the current quarter to between $320 million and $325 million, Finisar’s stock price slipped by as much as one-fifth in after-hours trading as investors digested the results.

That slump was an apparent response to a squeeze on margins – partly a result of the recent acquisition of Germany’s u2t Photonics - while it also recognized that Finisar’s latest profits had been boosted to the tune of $8.3 million by the sale of its Korean subsidiary during the quarter.

Elsewhere, Finisar is continuing to invest heavily in a new building at its manufacturing site in Wuxi, China, meaning that cash, cash equivalents and short-term investments on the company’s balance sheet were down nearly $42 million in the quarter.