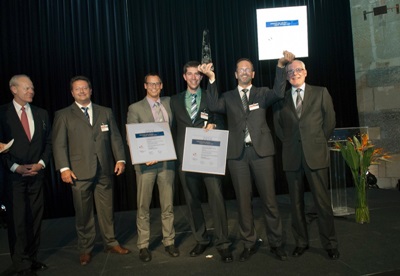 A method for improving the efficiency of silicon solar cells has won first prize in the Innovation Award Laser Technology 2014.

Developed by a team led by Ralf Preu from the Fraunhofer Institute for Solar Energy Systems (ISE) in Freiburg, the “laser-fired contact” approach has been used by industrial partners - including Q-Cells - to set new world-bests for cell and photovoltaic module efficiencies.

Around one million PV modules featuring the technology and operating at an efficiency of 18.5 per cent are now thought to be installed, after work that began more than ten years ago at Fraunhofer ISE under Preu's leadership.

The patented process is described as an elegant and cost-effective way to fabricate a dielectrically passivated rear surface for high-efficiency silicon cells.

The cell performance is improved by removing part of the back-side contact of a crystalline silicon cell, and allowing aluminum to be alloyed into it.

Aachen ceremony
Preu received the award on behalf of his team at the Aachen town hall, with the ceremony taking place as part of the biannual Arbeitskreis Lasertechnik (AKL) international laser technology congress.

Selected by a jury of nine experts, the Fraunhofer cell manufacturing process won the €10,000 first prize ahead of two other technologies that were shortlisted from 23 applicants. In second place, and represented by Markus Kogel-Hollacher from Precitek Optronik, was a new interferometric form of metrology for laser materials processing.

“Femtoprint”, a project funded by the European Commission for precision glass manufacturing with ultrafast lasers - and now a spin-off company based in Switzerland - was awarded third place. Yves Bellouard from the Eindhoven University of Technology in The Netherlands represented the Femtoprint team at the Aachen ceremony.

The Innovation Award Laser Technology is awarded every two years by AKL and the European Laser Institute (ELI). It can be conferred on an individual researcher or an entire project group, for outstanding innovation in the field of laser technology, and in 2012 was won by a picosecond-pulse system for embossing and printing.

The projects in question must relate to the use of lasers in materials processing, or methods for producing such laser technology, with key criteria including a demonstrated commercial benefit, the innovative quality of the source, system or process, and a creative approach to technology development.