Photonics PPP: think beyond the funding 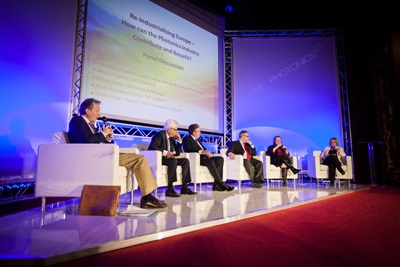 by Mike Hatcher in Brussels
The photonics public-private partnership (PPP) now under way in Europe must go beyond the normal role of research funding, and help to address wider political, strategic and economic challenges.

That’s according to Wolfgang Boch, the man now heading up photonics activity at the European Commission’s “DG Connect” unit.

Boch, who replaced Thomas Skordas in that role on February 1, told delegates at the eighth annual general meeting of the Photonics21 stakeholder group, held in Brussels on March 28:

“Photonics has achieved tremendous recognition [under the Seventh Framework Program], and is a very well-organized, dynamic and agile community.”

But regarding the launch of the photonics PPP within Europe’s wider Horizon 2020 innovation program, Boch urged the gathering of industry and university representatives to think beyond the bounds of their next grant proposal:

“The issue is not just about [research] funding,” said Boch, whose previous role at the EC included setting up the Future Emerging Technology (FET) prioritized research themes on graphene and the human brain. “Europe has strengths in networking and value chains, and we must find mechanisms to develop regional clusters.” 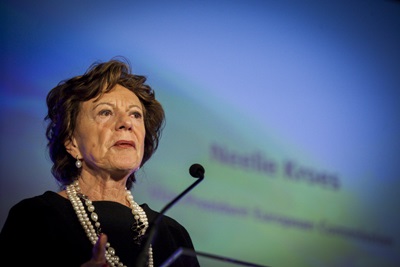 Kroes: 'PPP is a powerful opportunity'

Getting the message
The issue of value chains and how photonics might play a key role in the mooted “re-industrialization” of Europe dominated discussions at the Photonics21 AGM, which was visited by European Commission vice president Neelie Kroes for the fourth year in succession.

Depending on the outcome of EC elections later this year, it could be her last visit, and Kroes took the opportunity to emphasize that the photonics PPP needed to focus on research that “doesn't stay locked in a lab; but that leads to innovation in the market and has an impact on lives”.

“The message is sinking in about photonics and its significance,” she said, adding that the technology is now cropping up in her discussions with Europe's political leaders. “It is not just a way to spend public money – it is targeted action that can link up value chains and bring a growth boost to more than repay the investment. [But] ideas need to become real products and real businesses.”

In a diversion from her official text, Kroes highlighted the issue of youth unemployment in Europe, describing it as her biggest worry. “It is absolutely unacceptable that youth unemployment is above 60 per cent in some countries,” she said. “A lost generation is a danger to democracy and we have to address it.”

Noting the growing impact of photonics over the past decade, Kroes clearly believes the industry can help to address that situation and create jobs for a highly educated workforce. But the thorny issue of a rigid employment rights across much of the European continent remains a major hindrance.

European labor "rigidity" concerns
Photonics21 vice president Giorgio Anania picked up on that issue in response to a panel discussion at the AGM, saying that Europe spent vast amounts of energy on its “old” industries, and that labor rigidity in many European countries meant that “the handbrake is on” when it comes to job creation by new ventures.

Panel speaker Gareth Jones, the CEO of UK-headquartered Gooch & Housego (G&H), echoed that sentiment, and described employment regulations as a “major drag” in continental Europe. When it comes to evaluating potential acquisitions, Jones said that mainland Europe does a lot less to encourage investment than the US, UK or Far East – although his company did recently buy out the Greek firm Constelex.

Photonics21 president Michael Mertin agreed with the need for employment reform. Wearing his business hat as Jenoptik’s CEO, he said that labor regulations inhibited the European photonics industry’s ability to react quickly in what is a dynamic, fast-moving sector. “There’s lots of positive attitude on funding, but the execution needs additional measures,” he said.

Introducing the AGM, Mertin said that a new “partnership board” comprising senior Photonics21 and EC representatives would now play a key strategic role in the PPP, but emphasized that the organization would retain its traditional “bottom up” approach to prioritizing research areas through its decision-making board of stakeholders and application-focused work groups.

Those work groups are now starting off the process of prioritizing specific research themes for the PPP’s activity under the EC’s 2016-2017 work program. That prioritization effort should be largely completed by September, and ready for final approval in December this year, in advance of a subsequent call for proposals.