Energy used for general illumination set to plummet by a quarter between now and the end of the decade.

Analysts at the consultancy company IHS are predicting that the switch to solid-state lighting will cut global electricity demand for general illumination by a remarkable 24 per cent by 2020.

According to the firm’s lighting industry experts, the amount of energy consumed by the installed base of lighting technologies for general illumination totalled 3.61 trillion kWh in 2013.

But as LED-based lighting becomes more affordable, that annual total will fall to just 2.75 trillion kWh by 2020.

Overall, says IHS, the installed base for general illumination – defined as lighting of homes, businesses and street lamps, but not including architectural or theatrical lighting - will account for 10.3 per cent of the net electricity generated in 2020. But that will represent a sharp fall from the figure of 16.4 per cent estimated for 2013 by the same company.

And such is the improvement in energy efficiency of the new technologies now becoming widespread that the total electricity usage due to lighting will decline even though the total number of lamps in operation will increase.

That prediction goes against an alternative scenario building on the fact that historically energy consumption has increased alongside the adoption of increasingly efficient artificial lighting technologies – ever since the invention of the candle (see graph below).

Speaking at the SPIE Optics + Photonics conference back in 2010 Jeff Tsao, the chief scientist at Sandia National Labs’ Energy Frontier Research Center for Solid-State Lighting, showed that for the past three centuries the global “consumption” of artificial light had stayed in proportion with the ratio of GDP to the cost of producing that light. 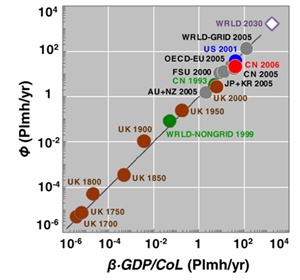 Installed base
According to IHS, the global installed base of lamps will rise to some 59.3 billion units in 2020, up from 56.4 billion in 2013, with LED technologies becoming more popular as they fall in price and as traditional lighting technologies are phased out.

“The fall in electricity consumed by lighting is being driven by the systematic ban of inefficient - mainly incandescent - lamps and bulbs in countries across the world,” said William Rhodes, the analyst firm’s lighting research manager.

“As these bans start to kick in, consumers and business owners will be replacing their lamps with more energy-efficient technologies.”

Despite the clear advantage in terms of energy efficiency, consumers are yet to adopt LEDs in very large numbers because of the relatively high up-front cost of the technology, Rhodes noted. Instead, shoppers are opting for cheaper options like compact fluorescent (CFL) or halogen lamps.

That is because CFLs consume only a quarter of the electricity used by an equivalent incandescent lamp, and are way cheaper than LEDs. Meanwhile halogen lamps are popular because they are seen to imitate the “warm” light associated with incandescent lamps while remaining relatively cheap.

But consumer behavior is expected to change in a more significant way as the price of LED lamps and bulbs fall, even though cost will remain an inhibitor for “many years”. That will be the case despite average electricity savings of 85 per cent with LEDs, Rhodes said, although it will depend on the cost of electricity in different geographies.

And Rhodes admits that the sheer flexibility of LEDs could reduce their impact on energy consumption. With decorative and architectural applications, like under-counter lighting in kitchens or “kickboard” lighting close to the floor, now possible, the public could end up consuming many more lumens than they do currently.