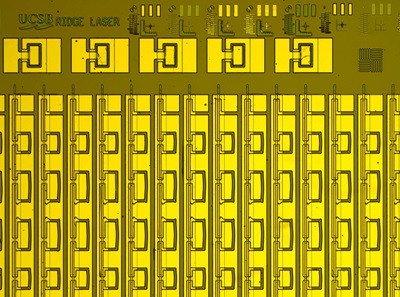 A University of California, Santa Barbara (UCSB) research team led by John Bowers and Arthur Gossard is developing a new way of producing high-performance lasers on low-cost silicon substrates, in work that could lead to much cheaper photonic devices for communications.

Published in a recent Applied Physics Letters paper and also the subject of a presentation at next week’s Optical Fiber Conference (OFC) in San Francisco, the UCSB researchers have demonstrated quantum-dot lasers on silicon with a record performance at the 1.3 µm telecom wavelength.

Grown by molecular beam epitaxy (MBE), a standard fabrication method in the compound semiconductor industry, the ridge waveguide lasers are based on InAs dots and delivered a continuous-wave output power of nearly 180 mW. They also operated at up to 119°C, beating the previous best of 105°C for similar devices, with yields said to be repeatable across multiple dies and wafers.

Marrying the performance of III-V semiconductors with the low-cost manufacturing potential of silicon substrates has been a long-held goal of researchers aiming to bring down the cost of optical communications systems, and Bowers’ UCSB research group hit the headlines back in 2006 when Intel announced its co-development of a hybrid indium phosphide/silicon laser with the team.

But the performance of lasers grown on top of silicon have typically been very poor, a result of the lattice mismatch between the different materials, which leads to threading dislocations in the crystal structure.

This latest work shows that quantum-dot lasers grown on silicon can perform similarly to quantum-well devices produced on their native semiconductor substrates in the conventional manner, and the researchers believe that it is an important step towards large-scale photonic integration at low cost.

Crystal imperfections
With quantum wells, which are two-dimensional devices, imperfections in one part of the well can affect the entire layer structure. But because quantum dots are independent of each other, they are less sensitive to any crystal imperfections resulting from the growth of laser material on silicon, the researches explain.

“Because of this, we can grow these lasers on larger and cheaper silicon substrates,” said Alan Liu, UCSB graduate student and lead author on the recent journal publication. Because of their small size, he added, the quantum dot lasers also require less power to operate than quantum well equivalents, while producing more light.

Liu and colleagues worked with the UK-headquartered semiconductor epitaxy specialist IQE on the latest work, using some unusual steps that would need to be adapted before any volume device production was possible.

They first grew a 500 nm-thick layer of germanium on top of a 150 mm-diameter silicon substrate. That was followed with the deposition of a gallium arsenide nucleation and buffer layer. But before the indium arsenide quantum dots were added, the wafer was first diced into smaller pieces that were then used as “virtual” GaAs substrates.

Despite those unconventional steps, Liu is confident that the approach could deliver cheaper photonic devices in the future.

“The major advantage of epitaxial growth is that it enables us to exploit the existing economies of scale for silicon, which would drive down cost,” he said. “MBE is the best method for creating high-quality quantum dots that are suitable for use in lasers.”