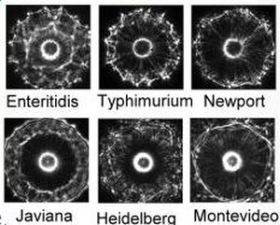 Reliable detection of Salmonella is a serious concern in the food industry, with the US FDA and other regulators applying zero-tolerance standards for the presence of the bacteria.

But outbreaks of Salmonella continue to occur, reinforcing the need for faster and more cost-effective methods to identify the bacteria and its different strains, especially if those methods can do so without biological reagents or antibody probes.

Purdue University, Indiana, has developed an analysis platform known as BARDOT, short for BActerial Rapid Detection using Optical scatter Technology, that might prove to be of great value. It uses a red diode to scan bacteria colonies on an agar plate, and matches the resulting scatter pattern with a library of images to determine which pathogens are present.

The origins of BARDOT go back some time, beginning in a Purdue project aimed at identifying particle contaminants on semiconductor wafers, but Arun Bhunia of the university's Department of Food Sciences always felt that it could be of value if applied to microcolonies of bacteria grown on agar plates.

"A laser scattering approach had been used before, with the earliest attempts being aimed at detection of single cells in suspension," commented Bhunia. "From a microbiology standpoint, two different organisms may share similar morphological or structural properties, and a laser may not be able to differentiate them in suspension. Our system, by contrast, directly detects the colonies of bacteria on the agar plate."

BARDOT passes a 635 nm laser beam through the center of a colony and generates a unique scatter signature, for comparison with other such fingerprint patterns held on record. A low beam power limits the energy absorbed by the bacteria during the process to only 1 to 2 mJ mm-2, theoretically preventing any cellular damage that might interfere with subsequent analysis - although the team noted that the subtle effects of laser light on bacterial physiology merited further study.

Identifying serovars
The technique had already demonstrated that it could differentiate between a number of common bacteria, but the Purdue team has now tested its ability to identify different strains, or serovars, of Salmonella, an important factor for its use in commercial and industrial scenarios.

"We knew that the scatter pattern of a bacterium is medium-dependant, and changes according to the solid agar medium they grow on, so a major hurdle was finding growth media that ensured the Salmonella patterns were different from the non-Salmonella colonies on the agar plate," said Bhunia. "A second challenge was to make sure that the same agar media could also differentiate different serovars of Salmonella."

In tests, the data show that BARDOT accurately detected most of the 20 most prevalent Salmonella serovars with an accuracy of up to 95 percent, and proved able to individually distinguish eight of the most significant serovars. This ability can be highly valuable when attempting to trace an outbreak back to the original source.

The main barrier for the system's current configuration is the need for a sample to lend itself to optical scattering in the first place. Fungi and yeasts, to name two examples, appear to be too dense. But that still leaves many other pathogens as desirable candidates for detection.

"Right now, we are testing this system with naturally contaminated samples for Salmonella, and also continuing to develop methods for other pathogens such as E. coli, Staphylococcus, and many other pathogens of food, environment, water or clinical samples," noted Bhunia.

In the mean time, BARDOT is already marketed commercially through Advanced Bioimaging Systems, a spin-out from Purdue, and is set to make continued inroads into food testing thanks to its ease of operation and cost-effectiveness.

"BARDOT needs minimal reagents, apart from the growth media, and so is relatively inexpensive to operate," Bhunia said. "Unlike other methods, it does not damage the integrity of the colony, which can also be used for genomic fingerprinting or molecular study. It should help microbiologists to find any pathogens very quickly, provided they have the scatter image library. I believe it has the potential to be a revolutionary approach to microbial testing."