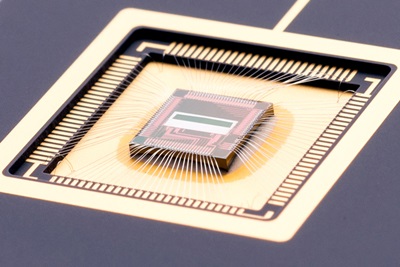 Leading research teams have presented a raft of innovations in the field of imaging sensor chips at the IEEE-organized 2014 International Electron Devices Meeting (IEDM).

Taking place in San Francisco this week, the conference is regarded as a key event in the dissemination of semiconductor device research, with key players from the giant chip makers and leading university groups taking part.

While most of the conference sessions focus on electronic device design and manufacture, a handful of them are dedicated to developments in photonics technologies – largely new types of sensors for imaging applications.

Among them were a silicon detector capable of operating in the increasingly important far-infrared range – a part of the spectrum usually regarded as being well beyond the range of any conventional silicon chips.

Devised by a multinational team from Texas, Germany and Lithuania, the Schottky barrier diodes – made using a normal CMOS process - were able to detect at 9.74 THz.

“The detector exhibits 14 times higher responsivity near 10 THz than the highest previously reported for electronic detection,” they wrote. “This work also suggests electronic detection beyond 10 THz and potential for affordable imaging in the infrared range using foundry CMOS.”

In the same session, a collaboration involving Panasonic and others said that new and highly sensitive photodetectors based on thin-film crystalline selenium could “open the door” to next-generation, ultrahigh-definition imaging systems.

Laminated onto a CMOS circuit, the photodiodes showed an external quantum efficiency of more than 50 per cent between 350 nm and 600 nm, dropping off to zero in the red end of the spectrum at around 690 nm.

DNA sequencing roadmap
A team from Belgian electronics research base IMEC – always a major contributor at IEDM – described a new imager platform combining both the light sensitivity of CCD and the speed of CMOS sensor technologies.

“The time delay integration (TDI) imagers use a light-sensitive CCD imaging part with a column-based CMOS readout, combining the best technologies for both integration of light-induced charges and a fast readout,” wrote the team in its paper.

The team believes that the device, the first of its kind, will enable “beyond state-of-the-art” performance for industrial inspection and Earth observation applications, once it is combined with a backside illuminated imager platform also under development at IMEC.

A separate session saw Annette Grot from US-based Pacific Biosciences reveal details of a roadmap for the light sensors required for massively parallel DNA sequencing. Recent advances in both CCD and CMOS sensors have been part of the reason behind a huge drop in the cost of one of the main approaches to DNA sequencing, which marks base nucleotides with fluorescent “tags”.

Key sensor characteristics for this application include resolution, sensitivity and frame-rate, Grot says, adding that future advances could help continue what has been an exponential decrease in DNA sequencing cost.

Equipment from Pacific Biosciences, as well as sequencing specialist Illumina and ThermoFisher use a free-space optical system to relay fluorescence signals generated on the sample plate to the image sensor. Grot says that, ideally, the resolution of the sensor should match or exceed the optical resolution of the collection path.

Elsewhere, a Japanese team highlighted what it claimed to be the first demonstration of 3D-integrated CMOS image sensors featuring in-pixel analog/digital converters. The 64-pixel device made by a collaboration between NHK’s research labs and the University of Tokyo was able to capture video images with a dynamic range of 80 dB and excellent linearity, the team said.