A Parliamentary enquiry into the strengths and weaknesses of business-university collaboration in the UK has concluded that more government money is needed to support innovation schemes, including the “Catapult” centers that are modeled on the Fraunhofer approach in Germany.

The report, published a few days before the UK chancellor’s Autumn Statement announcement on December 3, states that Innovate UK – the new name for the recently rebranded Technology Strategy Board – should receive more cash in the future if the UK is to meet targets for overall spending on research and development. 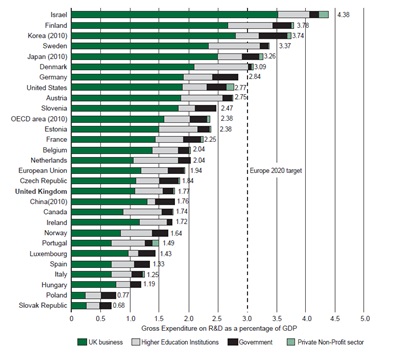 As of 2011, only 1.77 per cent of the UK’s gross domestic product (GDP) was being spent on research and development activity, against a 3 per cent target set for 2020 by the European Union (see figure). In comparison, the figure for the US and Germany was already close to 2.8 per cent, while Korea was spending 3.74 per cent and Israel topped the rankings at 4.38 percent.

“The Secretary of State has set out the case for doubling Innovate UK’s budget [from £500 million to £1 billion],” the enquiry report concludes. “The Autumn Statement and planned Science and Innovation Strategy are opportunities for the Government to give a statement of intent about increasing funding for Innovate UK over the course of the next Spending Review.”

The reports adds: “Investing in innovation brings about demonstrable economic returns. We therefore expect the Minister to be arguing strongly for increasing Innovate UK’s funding, in addition to protecting the financial support for science and innovation more broadly, in forthcoming Spending Review negotiations.”

Hauser report recommendations
The Parliamentary Business, Innovation and Skills (BIS) Committee also echoed the recent recommendation to extend the Catapult network by Hermann Hauser, the technology entrepreneur and venture capitalist whose 2010 report led to the creation of the first few such centers.

“The Catapult network has made a promising start, with Catapults undertaking a range of activities in a range of fields,” wrote the cross-party group. “To capitalise on this, it is important that best practice is shared across the Catapult community so that existing work can be embedded more consistently across the network, as recommended by the Hauser review.”

Although there is no photonics-dedicated Catapult center at present, the technology area was initially short-listed for one, and optics and photonics are closely linked with centers for high-value manufacturing and satellite applications. The BIS committee also heard from Martin Dawson, head of the Fraunhofer Centre for Applied Photonics in Strathclyde, as part of its evidence gathering back in January.

In his report, published just last month, Hauser recommended that an additional one or two Catapult centers should be established each year, with a view to having as many as 30 by 2030. He said that the core public funding for the network – which, as with the Fraunhofer model, would represent one-third of the total funding – ought to be £400 million per year.

“Growth of the Catapult budget requires increased funding for Innovate UK in line with recent calls to double UK innovation spend, bringing the Innovate UK budget closer to £1 billion per annum by 2020, such that it can explore and invest in a wider portfolio of emerging opportunities and support the most promising areas at scale,” Hauser wrote.

“Every university should have a single point of contact for businesses that are seeking to collaborate,” the committee concluded. “The forthcoming National Centre for Universities and Business (NCUB) online portal should clearly signpost contact information for each university, so that businesses looking to collaborate can easily find someone to talk to as a first point of call.”

“A lot of those ideas we support come from the work done by our excellent universities, and I’m pleased that the BIS committee have recognised that in their report.

“Of course, we want to go further than we do already and help more businesses bring their ideas to market. The committee’s report makes a number of recommendations which could help us do that, particularly where they chime with Hermann Hauser’s recommendations on the future of the Catapult centres.”

Gray stressed that although nearly half of all proposals received by Innovate UK warrant funding, only about a quarter of applications actually get funded.

“That means that there are some exciting and innovative ideas that we aren’t able to give the support they need, despite our best efforts,” he said.

“If we want to have a truly innovation-led economy we need to make sure that all of us, Government, researchers, innovators and investors avoid the temptation to take a short-term view and invest our time, effort and financial support into something that will have much longer-term benefits.”

Industry view
Those comments echoed evidence from industry to the BIS committee. Jaguar Land Rover's head of research Antony Harper said: "The Government just needs to have that mindset that, actually, it does need to help build some new capacity.

"It is not just about connecting existing businesses; we really need to have a positive aim that we are going to grow some major new industries that can contribute to growth and wealth."

Meanwhile Alan Hughes, director of the Innovation Research Centre at the University of Cambridge, pointed out that that research and development work in the UK's private sector was "fantastically concentrated" in the hands of a small number of firms - and warned against unrealistic expectations that the SME sector might have much impact on the overall research spend in the UK.

"The strategic decisions by those [large] firms are absolutely critical to the matching of any public sector research and development," he warned. "The whole of the independent SME sector in the UK accounts for less than 4 per cent of our R&D effort.

"There is a real order of magnitude problem in thinking that SMEs are going to do something dramatic."

Hughes also pointed out a trend that is seeing the country's largest research spenders invest more of their development money overseas. "It is not as if they are reducing their research expenditures," he said. "But the proportion that UK-based multinationals are investing in overseas research has risen relative to their domestic research."