Laser diodes made by Ithaca company much in-demand for data centers and from growing silicon photonics sector. 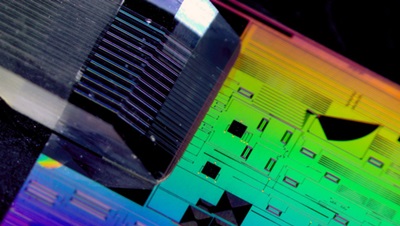 In what appears to be a strong exit for the nine venture groups to have invested in BinOptics over the years, the deal should complement M/A-COM’s existing expertise in the production of devices and systems used in radio and millimeter-wave communications – and pave the way for a major expansion in laser production at BinOptics’ Ithaca fabrication facility.

Founded by Alex Behfar back at the height of the optical communications boom in 2000, BinOptics’ expertise is based around the so-called “etched facet technology” (EFT) process – a high-yielding lithographic method for making laser diodes on a variety of semiconductor materials.

Behfar was also instrumental in the development of high-power pump laser diodes at the IBM gallium arsenide factory in Zurich that has subsequently been owned by JDSU, Oclaro, and more recently II-VI.

Despite the subsequent bust of the telecommunications sector in the early 2000s, the company managed to close a number of relatively small rounds of venture financing – including a $6 million series C round in 2006 and a $13.3 million follow-up in late 2011 – and diversified into blue laser diodes based on gallium nitride.

One of the critical features of the EFT technology is that it enables laser diodes to be fully fabricated and automatically tested while still on the host wafer, and before they are separated into individual devices – an advantage shared with vertical cavity surface emitting lasers (VCSELs).

“The facet cleaving operation is often one of the most costly and low yielding operations in the factories of our competitors,” BinOptics claims on its web site. “EFT eliminates this cost.”

Capacity constraints
Commenting on the transaction, M/A-COM’s CEO John Croteau said: “We believe BinOptics’ wafer-scale model for indium phosphide lasers will play perfectly to our strength in compound semiconductor manufacturing, allowing us to quickly address what is currently a supply-constrained part of the optical component industry.

“With this move, we anchor our new photonic portfolio with indium phosphide lasers,” added Croteau, who believes that the acquisition will double the company’s addressable market within the optical components sector.

Among the specific target sectors for the technology are high-speed interconnects for data centers and the emerging silicon photonics market – which still relies on non-silicon light emitters.

BinOptics has already made some impact in the silicon photonics world, working with Kotura - now part of Mellanox - to develop laser arrays suitable for low-cost alignment and flip-chip bonding to silicon-based optics, in a manner found more typically in the electronics industry. Now, it appears, demand for the technology in communications and data center applications is burgeoning, with demand outstripping the available supply.

Speaking in an investor conference call to discuss M/A-COM’s latest financial quarter last week, Croteau said that the company planned to scale up laser production following the close of the deal – which is anticipated in the spring of 2015:

“BinOptics is in fact the largest pure-play high-speed communications laser supplier in the world,” claimed the CEO. “They are highly differentiated [by their] etched-facet technology, backed by broad patents and strong intellectual property.”

The BinOptics deal represents the second photonics-related acquisition by M/A-COM in recent weeks. In September, it bought out another New York-based outfit, in the form of the optical IC design house Photonic Controls.

“Doubling down” on photonics
Croteau told investors that BinOptics is currently one of the world’s three primary suppliers of InP-based semiconductor lasers - the others being Mitsubishi and CyOptics, with the latter recently acquired by the diversified chip maker Avago Technologies.

The CEO said that BinOptics’ EFT technology has helped it to take a rapidly growing market share, as well as an “inordinate” share of reference design wins. He reckons that the firm has been posting sales growth close to 100 per cent recently, and that it could continue to grow at 50 per cent in the next couple of years.

“The opportunity came where they needed to dramatically expand capacity, so it naturally came a time for a company like M/A-COM to acquire and scale the operational capability. And that’s what we plan to do.

“The whole industry has been capacity constrained to the point where there have really been supply limitations in the access part of the market.”

Croteau suggested that M/A-COM would be able to help BinOptics quadruple its laser manufacturing capacity within a year of closing the deal. Revenues should scale accordingly, following demand for the technology from wireless backhaul applications in China. It is also needed by many of the biggest names in the data center industry.

“There is no question our optical business is off to the races,” Croteau said, adding that the BinOptics deal would help it to “double down” on the growing market opportunity. “Solving the supply chain issues for this critical component is a big, big, big deal and doing it with a high-performance, high-quality product is what it’s all about.”